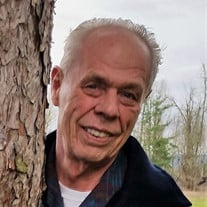 William Joseph "Bill" Sprinkel (fondly called "Punky" by his grandkids), 74, of Hillsboro died March 30 following a 5 month battle with cancer.         He was born in Hillsboro, OR September 1, 1946 to George and Dorothy Sprinkel. Bill was the... View Obituary & Service Information

The family of William "Bill" J. Sprinkel created this Life Tributes page to make it easy to share your memories.