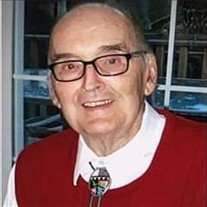 Russell Ralph Snook, 92, passed away February 17, 2022, due to complications of Parkinson's Disease. He passed at the Forest View Adult Care Home in Forest Grove, Oregon where he received loving care for over four years. Russell was born May 8, 1929, in Overton, Nebraska to Virgil and Zada (Dustin) Snook. He moved from Nebraska to Oregon in July of 1934, later settling in Vernonia with his parents, his older brother Melvin and his sister Betty Jane. They moved into a house on seven acres outside of town that had a barn, cow, chickens, garden, and fruit trees. As this was during the depression, this home and all it offered was a huge blessing to their family. While living there, the family added three more siblings: Joe, Alice and Max. They all spent their childhood in that house and graduated from Vernonia High School. On July 18, 1950, Russell married Willina Joyce Bowden in the Logan Temple. They had three children: Russell Ralph, Jr., Marilyn Joyce, and Stanley Richard Snook. They later divorced. Russell married Dorothy Davis (Rutledge) on December 10, 1966. Dorothy had four children from her first marriage: Joyce, Steven, Sally and Joe. In March 1969 their son, Ron was born, making a blended family of eight children. Russell and Dorothy lived in Cornelius for about fifty years. They had a beautiful home, yard, and garden. They loved gardening, canning, and working in their yard. They were known for growing beautiful flowers and, in later years, sharing their amazing garden harvest with others. Russell held several jobs during his lifetime. He worked at the Oregon-American lumber mill in Vernonia for ten years and then moved to Mackay, Idaho, where he got a job with the U.S. Forest Service. That was his favorite job. He and his family moved back to Oregon in 1960, where most of his employment was in the grocery store business. For almost 20 years, he worked for Safeway. He was a produce manager and could help you pick the best watermelons. He came from a fishing and hunting family. He hunted deer, elk, and antelope. He even got a moose in Alberta and a bear in the Snake River Wildlife Area. He loved to fish, especially salmon fishing with his family. Russell also was a renowned rockhounder. He loved to go on field trips with the Tualatin Valley Rock and Gem Club in search of various types of semi-precious stones. He developed a talent for cutting, polishing, and making beautiful cabochons, entering his display cases into competitions at rock and gem shows in the area. He became well known for his work and earned many masters awards. He also was active in the Portland Regional Rock and Mineral Club and the Northwest Federation of Rock and Mineral Club, serving as President in each at various times. Russell and Dorothy have been active members of the Church of Jesus Christ of Latter-Day Saints and are currently members of the Gales Creek Ward. They were previously members of the Council Creek Ward and Fern Hill Ward. They have had many callings and responsibilities within the church. They served as ordinance workers in the Portland Oregon Temple for fifteen years. They also served a two-year service mission in the LDS Employment Center and served for a few years in the LDS Family History Center. Russell loved his wife, family, and friends. He had great faith in God and served Him all his life. He was so grateful when in November 2020, his wife, Dorothy was able to join him in the Forest View Home, where he spent the last 15 months of his life reunited with her. Russell is survived by his wife, Dorothy; his children, Ralph (Pam) Snook, Marilyn (Charlie) Mecham, and Ron (Tracy) Snook; and his stepchildren, Joyce (Richard) Dixon, Steve (Marcia) Rutledge, Sally (David) Cancilla, and Joe (Rhonda) Rutledge. He also is survived by his siblings, Melvin, Joe, Alice (Brown), and Max. He also is survived by 22 grandchildren, 30 great-grandchildren, and 14 great-great grandchildren. He was preceded in death by his son, Stanley Richard Snook; his parents, Virgil and Zada Snook; and his sister, Betty Jane (Jacobs). Russell's funeral services will be held 11:00 a.m. (PST), Saturday, February 26, 2022, at the Church of Jesus Christ of Latter-Day Saints, Gales Creek Ward, located at 2700 Leon Drive., Forest Grove, Oregon. A viewing will be held one hour prior to the service. He will be laid to rest at the Valley Memorial Park in Hillsboro, Oregon. Arrangements are under the director of Fir Lawn Memorial Park and Funeral Home. www.firlawnfh.com

Russell Ralph Snook, 92, passed away February 17, 2022, due to complications of Parkinson's Disease. He passed at the Forest View Adult Care Home in Forest Grove, Oregon where he received loving care for over four years. Russell was born May... View Obituary & Service Information

The family of Russell Ralph Snook created this Life Tributes page to make it easy to share your memories.

Send flowers to the Snook family.