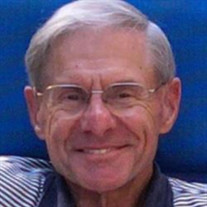 After losing over a 10-year battle with Alzheimer’s, Ross Kines peacefully passed away with his wife of 65 years by his side holding his hand. A loving family man, Ross was the husband of Doreen, and father of Kim, Cindy, and Jenny. Ross grew up in Forest Grove, with his brother, Cameron, and their parents, Dr. Robert Kines and Gertrude Kines. He attended schools in Forest Grove, played baseball and basketball, and received the Viking Athletic Achievement Award. He graduated from Willamette University where he was a member of Sigma Alpha Epsilon Fraternity. That summer he married his best friend, Doreen “Dodie” Gates. In the fall he was drafted in the Army and spent the next two years at the Army Chemical Center in Maryland. Following his honorable discharge, Ross and Dodie attended Oregon State for graduate study, then settled in Hillsboro. He accepted a job at Tektronix in Beaverton where he worked for the next 27 years. Following retirement, he worked for Hillsboro Parks and Recreation in park maintenance. Ross was a kind, intelligent and caring man, whose infectious smile welcomed everyone. He was a lover of all outdoor activities which he enjoyed doing with his wife and daughters. Ross enjoyed hunting, fishing, camping, clamming, skiing, tennis, ice skating, yard work, and golf… several of which often challenged his perfectionism and resulted colorful vocabulary. He enjoyed all music, photography, and restoring his pride and joy a 1959 Austin-Healey convertible. Ross was a quiet observer with a subtle sense of humor which he expressed when you least expected it. He was one of the last true gentlemen who kept negative opinions to himself. He was a father and husband who would sacrifice anything for his family, happily embracing his clamoring, boisterous daughters upon returning home from a stressful day of work. He will forever remain deep in our hearts and will always be missed. He was preceded in death by his parents and infant daughter, Kristen. He is survived by his wife, Doreen, daughter Kimberly and granddaughter Frida of Seaside, daughter Cynthia of Bend, and daughter Jennifer (son-in-law Wendell Hammon III) of Portland. Brother Cameron (sister-in-law Marie) of Sammamish, WA, and families. Our thanks to the loving caregivers at Evelyn’s Adult Foster Home and Jennings McCall whose compassion and friendship made life more comfortable for Ross. Also, our appreciation goes to the Care Partners Team (Hospice) who provided us with needed advice and support. No Celebration of Life will be held at this time due to the pandemic. Remembrance may be made to the Alzheimer’s Association or other Alzheimer’s groups.

After losing over a 10-year battle with Alzheimer&#8217;s, Ross Kines peacefully passed away with his wife of 65 years by his side holding his hand. A loving family man, Ross was the husband of Doreen, and father of Kim, Cindy, and Jenny.... View Obituary & Service Information

The family of Ross O. Kines created this Life Tributes page to make it easy to share your memories.

After losing over a 10-year battle with Alzheimer’s, Ross Kines...