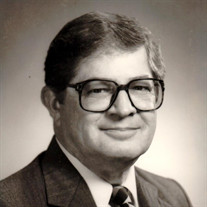 Dr. Robert Leonard Casteel was born March 4, 1931 in Aloha, Oregon and passed away October 8, 2021 in Beaverton, Oregon. Robert was 90 years old at the time of his death. Bob was born to Robert F. Casteel and Mable Casteel (Dodson). The family of Robert and Mabel grew to include Delores Mae and Peggy Ann. Bob grew up in Aloha, Oregon attending Aloha-Huber Grade School and graduating from Beaverton High School in 1949. While in high school, Bob excelled in both athletics and academics. He was a successful and enthusiastic member of the debate team and was all-conference in football and track. Outside of school he also boxed for five years, remarkably losing only one fight. The Casteel family was involved in raising and racing greyhounds, and as a teen Bob began working at Multnomah Kennel Club. After high school, Bob attended a two-year “feeder” school called Vanport Extension Center (which ultimately became Portland State University). After his two years at VEC, Bob started at Pacific University on a debate scholarship. Bob began at Pacific thinking he would pursue a profession in law. While at Pacific, Bob met Barbara Jo Pelton. They married March 13, 1954 at Aloha Community Baptist Church. Bob graduated from Pacific University later that year. While studying for his law degree, he kept getting distracted by homework for other classes he was taking. Recognising where his interest truly rested, he switched focus and began his life’s work in speech pathology. Instrumental in Bob’s early career in speech pathology was Dr. Harold Lillywhite, Professor of Speech Pathology as well as Chairman, Division of Speech Pathology and Audiology, Crippled Children’s Division of the University of Oregon Medical School (UOMS). Dr. Lillywhite arranged the hiring of two additional speech pathologists to help shoulder his workload: Bob and Bob’s future life-long friend Don Nelson. Bob would later describe this as being “pushed into the deep end” of learning speech pathology. Robert G. Casteel was born to Bob and Barbara on May 23, 1958. The young family moved to Seattle where Bob completed his Master’s degree from the University of Washington in August of 1960. The family welcomed their daughter, Joann Marie (Price), on September 22, 1960. Bob obtained his PhD from University of Oregon on June 15, 1969. Bob taught at PSU until 1992. In July of 1992 Bob suffered a major stroke, and he retired from his teaching position at Portland State University. In 1964 Portland State began a Speech and Hearing Sciences program. Bob — along with his colleagues, Dr. Robert English and Dr. Jim Maurer — was instrumental in the founding of this department and its early development. Later the department also included Joan McMahon, Dr. Mary Gordon, Kerri Lewis and Dr. Ted Groves. In his career he enjoyed working with Dr. Don Nelson, Dr. Ed Stone, Dr. Paul Ventura, Dr. Rhea Paul -- to name just a few. Bob and Barbara lived in Aloha and Beaverton. Their children graduated from Aloha High School. Bob is survived by his wife, Barbara Jo Casteel (Pelton), his son Robert G. Casteel (Lori), daughter Joann Marie Price (Steven), seven grandchildren (Christopher, Andrew, Anna, Amanda, Matthew, Robert, Eli) and nine great grandchildren (Jesse, Haven, Everett, Carson, Jack, Carl, William, Ella, Cora) several nieces and nephews, and his sisters Delores Casteel and Peggy Glaze. Bob was passionate about sports (particularly loyal to PSU and U of O) and was an outstanding professor and clinician in his field of Speech Pathology. He received the Frank R. Kleffner Clinical Career Award for a career spent trying to better understand and treat stuttering. He was declared a Fellow of ASHA, and received OSHA’s Honors of the Association, for whom he had twice served as president. For a few years at Portland State University Bob served as Academic Advisor for the athletic department - a perfect marriage of his passion for academics and passion for sports. When his first great-grandchild was born, he bucked tradition, declaring that he didn’t want to be just a “great” grandfather — he wanted to be “splendid”. And he was. To everyone. Bob will be remembered as a master storyteller, a loyal friend, and a loving, keenly attentive husband, brother, father, grandfather, and “splendid” grandfather. Bob leaves a legacy of love for his family, professional excellence, and an abundance of kindness and love.

Dr. Robert Leonard Casteel was born March 4, 1931 in Aloha, Oregon and passed away October 8, 2021 in Beaverton, Oregon. Robert was 90 years old at the time of his death. Bob was born to Robert F. Casteel and Mable Casteel (Dodson). The family... View Obituary & Service Information

The family of Robert L. Casteel created this Life Tributes page to make it easy to share your memories.

Send flowers to the Casteel family.