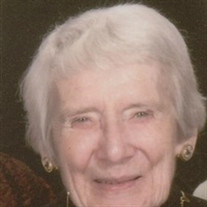 RHODA BERYL GLOVER, of Beaverton, Oregon, died Monday, 18 November at West Hills Health and Rehabilitation Center, Portland, Oregon from natural causes. She had recently celebrated her 90th birthday with many family members. Rhoda was born August 16, 1923 in Northville, South Dakota, to Arthur Scott and Martha Blair. At the age of 8, her family relocated to Mount Vernon, Washington, where she attended school and graduated from high school. Her early employment included a job at a Seattle music store and the Boeing Aircraft Company. On November 5, 1944, Rhoda married Ensign Harold Douglas Glover, USN. During WWII, they lived in Florida and Kansas before settling in Eugene, then Roseburg, Oregon in 1949. From 1949 to 1997, when she moved to Beaverton for health reasons, Rhoda and Harold committed themselves to their family, their business Modern Floors, friends, and to the Roseburg community. Rhoda's life was dedicated to her husband of 59 years, their seven children and their families, grandchildren and great-grandchildren, and many community involvements. Her life embodied commitment to family and friends. She inspired faith in Christ, commitment to learning and reading, appreciation for the splendor of God's creation, and the joy of music. She was a member of Valley Community Presbyterian Church in Portland and had served as an elder and deacon of the First Presbyterian Church of Roseburg. She also was a leader in the Boy Scouts and Cub Scouts of America, the Laubach Literacy program, and the Roseburg Altrusa Club for which she served as president. Her personal interests were instrumental and vocal music, bird watching, gardening, genealogy, and most of all keeping up with her family members. Travelling to visit family and friends in Norway, Great Britain, Chile, Canada, and across the U.S.A. brought her great joy. Rhoda leaves a legacy of faith, love, and grace with those who were blessed to call her Mom, Grandma, and Great Grandma, including her seven children and spouses: Doug and Mary Ann Glover of Vancouver, Washington; Charlene and Richard Hegdahl of Beaverton, Oregon; Beverly and Scott Pressman of Boise, Idaho; Brian and Lorraine Glover of Bainbridge Island, Washington; Dean and Becky Glover of Powell Butte, Oregon; Dennis and Cindy Glover of Henderson, Nevada; and Bruce and Carol Glover of San Antonio, Texas. Her eighteen grandchildren and twenty-four great-grandchildren, in whose lives she kept keenly interested are: Kimberly and Steve Gramm and daughters Sierra and Morgan; Ryan and Jenne Glover and sons Davis, Jackson, Weston, and Drake; Rebekah and Matt Neely and children Madeline, Annabelle, Asher, Lewis, and Toby; Jason and Kim Hegdahl and sons Nicholas and Tyler; Stacie and Steven Swenwold and sons Caleb, Alex, and Eban; Peter and Heather Pressman and daughter Adelaide; Nicole and Ben Pressman-Schneider and children Leo and Kaya; Andy and Katie Pressman; Jonathan and Ashley Glover and son Fox; Amy and Phil Membrere and children Shemsah and Wyatt; Joshua and Abby Glover; Emily Glover; Rachel Glover; Krystofer and Jennifer Glover and son Oliver; Heather Glover and son Braxton; Jacob Glover; Claire Glover; and Jessica Glover. Rhoda also leaves life-long friendships with sister Mildred Hawkins of Albany, Oregon; brother Doane and Alice Blair of Mount Vernon, Washington; sister-in-law Shirley Glover of Kalama, Washington; sister-in-law Berenice Glover of Milwaukie, Oregon; and many beloved nieces and nephews. A memorial celebration of Rhoda's faith and life will be held Saturday, December 7th, 2:00 p.m., at First Presbyterian Church, Roseburg, Oregon following a private family interment service at Roseburg Memorial Gardens. In lieu of flowers, the family suggests a donation to First Presbyterian Church, 823 Lane St., Roseburg, Oregon 97470; Valley Community Presbyterian Church, 8060 SW Brentwood St, Portland, OR 97225; or the American Heart Association.

The family of Rhoda Beryl Glover created this Life Tributes page to make it easy to share your memories.

Send flowers to the Glover family.