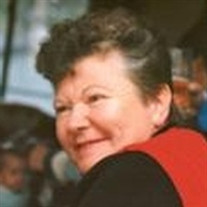 Reta Pauline Dissen passed away October 16, 2012 in her home by the side of her loving husband, John. Reta, the oldest daughter of Charles and Olive Tanner, was born on the last day of the year in 1934 in Springfield, Illinois. She had one sister, Wanda Volz, and one brother Stanley, who are both still living in Springfield. She met John, the love of her life, her buddy, her best friend, and married him September 1, 1953, and they have shared their lives together for the past 59 years. Drawn to Oregon in the early 50s by the allure of the forestry industry of Oregon, they lived in many towns of southern Oregon while John worked construction. After their first child Deborah was born in Illinois, their four other children John Jr. "Rick", Charles (married to Diane), Melissa, and Gregory (married to Carol) were all born in different towns of Oregon. Reta's love and passion in life was her family. She was a stay-at-home mother until her youngest was well into school. She then worked in dry cleaning and as an alterations seamstress, eventually operating her own alterations business. Reta and John retired and sold their home in the late 90's and purchased an RV and lived a mobile lifestyle for 10 years traveling from Alaska to Mexico and many stops in between. For the last 3 years, Reta and John have lived in Forest Grove, Oregon. Reta and John have had 11 grandchildren Ryan (married to Kristen), Jessica, Jacob, Charles "Matt" (married to Hannah), Jeffery (married to Ashley), Rebecca (married to Travis Larsen), Staci (married to Dan Jones), Elisabeth, Julia, Melissa "Graci", and Lexus, and 4 great grandchildren Tyler, Alexa, Charlotte, and Reagan. Reta was preceded in death by her parents, her daughter Deborah, and her grandson Jacob. A memorial service will be held at 12:30 p.m. on Sunday October 28, 2012 at Wynwood Assisted Living Center, 3110 19th Avenue, Forest Grove, Oregon.

Reta Pauline Dissen passed away October 16, 2012 in her home by the side of her loving husband, John. Reta, the oldest daughter of Charles and Olive Tanner, was born on the last day of the year in 1934 in Springfield, Illinois. She had one sister,... View Obituary & Service Information

The family of Reta Dissen created this Life Tributes page to make it easy to share your memories.

Send flowers to the Dissen family.