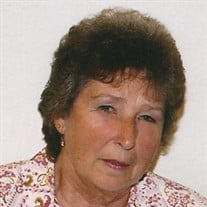 Peggy Jo Berg, 86, was born Saturday, March 9, 1935, in Bolivar, Missouri, daughter to Guy and Elsie (Adams) Kinsey. She lived in Missouri until 1937, when she moved to Southern Oregon. Peggy later moved with her family to Forest Grove and then Hillsboro, Oregon. Peggy married Dewey Aleshire, on September 4, 1953, in Hillsboro, Oregon. They had two sons, Jonathon and James Aleshire. Peggy later married Richard Berg, on August 15, 1964. Peggy and Dick celebrated 54 years of marriage. Peggy and Dick made their home in Hillsboro. Peggy's first job was working at the Venetian Theater, Hillsboro. After graduation, she worked for West Coast Telephone Company (later becoming part of GT&E), Tektronix Inc., and Xerox. Peggy and Dick loved boating and spent much time on the water. They loved boating in the American San Juan Islands and the Canadian Gulf Islands. One vacation, they sailed throughout the Caribbean for nearly 6 months on a 71', steel-hulled, two-masted schooner with friends. Peggy was a loving wife, mother, grandmother, sister, aunt, and friend. Her faith in God showed in how she lived her life. Peggy focused on everyone's best. Peggy and Dick moved to Cornell Estates March of 2018. Dick passed shortly after. Peggy resided in her apartment for a year before moving to Assisted Living. Gradually, dementia robbed her of many memories. But Peggy always remembered her sons. They were by her side through her journey until the Lord called her home, on Thursday, December 16, 2021. Peggy is missed. We are grateful for the impact she made on our lives. Peggy was preceded in death by her husband (Dick); sister (Corlee); her brother (James); and another sister, Anita, has recently passed. Peggy is survived by her sons and spouses, Jonathon Aleshire, James and Patti Aleshire, her grandsons, Brandon and Shelby Aleshire, Gerod and Amie Aleshire, her stepchildren, Michelle Jones and Michael Berg, her sister, Vye Brandaw, and her sister-in-law, Kay Kinsey, and many nieces and nephews. Memorial services will be held 10:00 a.m., Friday, April 15, 2022, at the Fir Lawn Memorial Park & Funeral Home, 1070 West Main St. Hillsboro, OR 97123. Pastor Keith Daugherty will officiate. A reception will immediately follow the services.

Peggy Jo Berg, 86, was born Saturday, March 9, 1935, in Bolivar, Missouri, daughter to Guy and Elsie (Adams) Kinsey. She lived in Missouri until 1937, when she moved to Southern Oregon. Peggy later moved with her family to Forest Grove and then... View Obituary & Service Information

The family of Peggy Jo Berg created this Life Tributes page to make it easy to share your memories.

Send flowers to the Berg family.