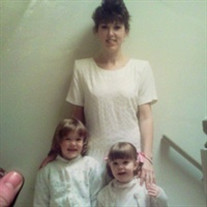 Almquist, Paula LaVonne Jones Stover 47 June 03, 1966 Oct. 14, 2013 Paula LaVonne Jones Stover Almquist, 47, passed away Monday, Oct. 14, 2013, at home in Hillsboro, with her family at her side after a well-fought battle with cancer. Paula was one of four children of Walter and Elizabeth Jones. She was a graduate of Glencoe High School (Class of 1984), and more recently attended Portland Community College. After high school, she married Loren Stover and had two loving daughters, Kailie Cummins and Piper Stover. She moved to the Vernonia area for a number of years, then to Eugene and returned to the Hillsboro area in 2007. Her return home was even more special as this is where she met her love, John Almquist, and they married on Aug. 18, 2012. Paula's life was one of love and kindness to those that she came in contact with. She was very much in tune with others' needs. If she noticed that someone might not have enough, she made sure they had plenty. She worked diligently in Vernonia during the 1996 flood relief. She had the unique ability to raise an infectious laugh from those around her. Paula also had many talents and interests. She was an accomplished thespian in high school, an entrepreneur starting her own cleaning business and at one time, she was very involved with rebuilding her Land Cruiser and participating in off-roading adventures. She loved home decorating, and if you were somewhere Paula decorated, you would always feel at home. After raising and educating her daughters, she realized her lifelong goal of continuing her education with a desire to become an occupational therapist assisting handicapped people in their transition from the hospital to home. Although she was a straight A student, this goal was cut short due to cancer. Those that knew her are blessed and she is sorely missed. Paula was preceded in death by her daughter, Sarah Elizabeth Stover. She is survived by her husband, John Almquist; daughters, Kailie Cummins and Piper Stover; mother, Elizabeth Jones; father, Walter Jones; brother, Timothy Jones; and sisters, Shannon Muster and Shelby Hyatt. A memorial service will be held at 1 p.m. Friday, Oct. 25, 2013, at Rood Bridge Park, 4000 S.E. Rood Bridge Road, Hillsboro, OR 97123. - See more at: http://obits.oregonlive.com/obituaries/argus/obituary-browse.aspx?recentdate=4&type=1#sthash.vnclqudM.dpuf

The family of Paula LaVonne Almquist created this Life Tributes page to make it easy to share your memories.

Send flowers to the Almquist family.