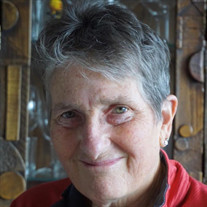 Patty Jo “Pat” Emmerson passed away April 27th in Hillsboro, Oregon, after a battle with metastatic breast cancer. Born in Kellogg, Idaho, March 8, 1945, to Vernon and Elizabeth “Viola” Emmerson, Pat spent her early childhood in Walla Walla, Washington. It was there that her deep love of animals became evident. Her lifelong family nickname, “Po” (aka Popo), came from her brother Rick, who as a toddler had trouble pronouncing Patty Jo. After her parents’ divorce, Pat and her brother and mother moved to Ventura, California. Pat attended the University of California-Berkeley in 1963, where she met Mark Nelsen. They married in 1966 and their daughter Dana Elizabeth was born in January 1967. In February 1968, they welcomed son Rafer John Ingwald into their lives. In 1969, the family headed to Canada, where they spent a few adventurous months camping in a tent with two small children. Then they headed to Maine where Berkeley friends had relocated. In June 1970, they welcomed another son, Jord Frederick, into the family. After Mark and Pat divorced, Pat moved to Oregon, where she went from working on ranches, for the Forest Service, and even moving irrigation pipe to becoming a technical writer and editor for Bend Research. In 1990 Pat moved to Eugene to continue her education and before long earned her Master’s degree in journalism from the University of Oregon. In Eugene she met the love of her life, Joyce Felton. In 1996, Pat and Joyce moved to Portland and were married in 2004. Living in Portland, Pat loved being closer to her daughter Dana (Furrow) and her grandchildren. In 2013 Pat and Joyce moved to Hillsboro, Oregon, just a few miles from the Furrow Farm, where she and Joyce and Dana spent many happy days riding their horses and participating in family activities. Pat enjoyed Dragon Boat racing, horseback riding, good food, concerts, piano lessons, ping-pong, tennis, camping, biking and hiking. She also enjoyed activities around home with her many friends as well as traveling in Oregon, California and Idaho. Pat was an exceptional cook, a voracious reader, and a caretaker of two- as well as four-legged friends. She loved all creatures; her knowledge of a variety of animals and species – from cats and rats to dogs, goats and horses – was extensive. Pat is survived by her wife Joyce Felton; brother Rick Emmerson (Helen) and their children Branden and Deidre; brother Craig Emmerson (Cindy) and their children Lindsey and Chase; daughter Dana Furrow (Matthew) and their children Zachariah (Ellie), Lydia, and Isaiah; son Rafer Nelsen (Sarah Rutherford) and their children Loïc and Mari; son Jord Nelsen (Darcy Hannibal) and their children Ezra and Marlo; her former husband Mark Nelsen (Lindsay) with whom she remained good friends throughout her life; her heartbroken dog Sooner; and her horse, Mia. She will be deeply missed by all who knew her. Pat’s ashes will be spread in the woods at the Furrow Farm where her pets and a horse are buried. A celebration of Pat’s vibrant life will be held September 17 at 3:00 at Jackson Bottom Wetlands Preserve Nature Center in Hillsboro.

The family of Patty Jo Emmerson created this Life Tributes page to make it easy to share your memories.

Send flowers to the Emmerson family.