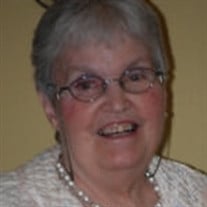 Harriet Nell Reed Jones was a daughter, sister, wife, mother, grandmother, aunt, and friend. Born on August 10, 1928 in Boulder, Colorado, she was the youngest of three children born to Homer and Evelyn Reed. Nell was an active member of the Episcopal Church throughout her life. She met her husband, David Lee Jones, at the Canturbury House Episcopal Campus Ministry at the University of Colorado in Boulder. They were married on June 10, 1950 after Nell completed her Bachelor of Science degree in Geology. Together they raised 4 children. Though David and Nell moved extensively throughout the United States to follow David's career with the US Forest Service, Colorado remained home. They eventually settled at Nell's family ranch in Boulder to live out their retirement years. Nell was widowed in 1998. Nell loved God, and she loved God's creation - the earth, its people, and its critters. With her husband, Nell was involved in Kairos Prison Ministry in the Episcopal Diocese of Colorado. She also traveled as much as possible prior to moving to Oregon for health reasons in 2001. In 2002 she suffered a debilitating stroke. Throughout the years after her stroke, Nell remained an active church member. Nell died peacefully and surrounded by family members on December 31, 2010. Nell is survived by: Mary Prismon, sister, of Malibu, California; four children - Diana Bretl of Portland, Oregon, Richard Jones of Burke, Virginia, Cynthia Acosta of Fort Worth, Texas, Reed Jones of Soddy-Daisy, Tennessee; 13 grandchildren and 8 great-grandchildren. A celebration of Nell's life will be held at 10am on Saturday, January 22, 2010 at St. James Episcopal Church in Tigard, Oregon. Her ashes will be committed to the ground in Boulder, Colorado later this year. In lieu of flowers, please send remembrances to St. James Episcopal Church, 11511 SW Bull Mountain Road, Tigard, OR 97224.

Harriet Nell Reed Jones was a daughter, sister, wife, mother, grandmother, aunt, and friend. Born on August 10, 1928 in Boulder, Colorado, she was the youngest of three children born to Homer and Evelyn Reed. Nell was an active member of the... View Obituary & Service Information

The family of Nell Jones created this Life Tributes page to make it easy to share your memories.

Send flowers to the Jones family.