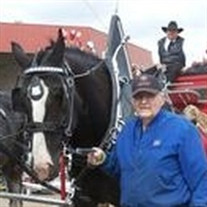 Neal William McInnis, a life long resident of the Hillsboro community died Thursday, December 29, 2011 at Tuality Community Hospital after a fall at home. Viewing and Visitation will be held Thursday, January 5th , Friday 6th and Saturday 7th from 10am to 4pm, at Donelson~Fir Lawn Memorial Center, 1070 West Main Street, Hillsboro. A Celebration Of Life Service will be held Saturday, January 7, 2012 at 2:00 pm at the Orenco Presbyterian Church, with Pastor Mark Rainey officiating. Family and friends are invited to attend a reception immediately following the service. Family Graveside Services will be held Monday, January 9, 2012 at 11am at Mt. Side Cemetery at Scholls with Military Honors. Neal William McInnis was born September 13, 1929 in Reedville, Oregon on the family farm, to Donald William and Julia Flint McInnis. He was raised and educated in the Hillsboro community having graduated from Hillsboro High School in 1949. He worked during his high school years on the Kinamann Dairy. He took a class at OSU to perfect his butter making skills. Some of the butter he made won awards. Neal joined the US Army serving from February 1951 to January 1953 and five years in the Army Reserve. He was employed at Rudie Wilhelm Company as a warehouse foreman and also for Mayflower Professional as a butter maker. Neal was united in marriage to Ruth LaVonne "Bonnie" Hamel on November 20, 1954 at the Orenco Presbyterian Church. He met Bonnie while he was working as an umpire where she was playing baseball in Portland. They celebrated fifty years of life together and raised four children before Bonnie preceded him in death in 2005. Among his personal interests Neal loved baseball; he was a good player and an even better umpire. He was active in Baseball during his military service in France and a member of the Portland Umpires Association for twenty-five years. Over the years Neal and Bonnie shared a love of Draft Horses. They were members of the Draft Horse Association and showed horses at the Oregon State Fair and the Washington County Fair for many years. He was a past member of the Tuality Masonic Lodge #6, Hillsboro Elks Lodge, Member of the Teamsters Union, a member of the Orenco Presbyterian Church. In the last few years he has enjoyed traveling with his friend LeRoy. They made a trip to Branson, Mo and regular trips with the Hillsboro Senior Center to Spirit Mountain for a day of fun. He also loved spending time with his family and his dog Roxy. Neal was preceded in death by his brother; Duncan and sister, Jean. Survivors include his children and spouses; Michael McInnis, Karen DeLoff and Chantha Sau, all of Reedville, Scott and Tami McInnis, Kathleen and Michael Thorud all of Gaston, brothers; Malcom and Ruth McInnis of Gaston, Donald McInnis of Aloha, sister Mary Sprague of Reedville, Also surviving are eight grandchildren; Shaun McInnis, Amy McInnis, Ryan Byrne, Nolan DeLoff, Emily and Allison Thorud, Kelli McInnis, and Andrew Thorud. Seven great grandchildren; Madison McInnis, Lillian McInnis, Gabriel and Samuel Byrne, Owen and Cheyenne McInnis, Braiden Santmyer. The family suggests that remembrances may be contributions made to the Orenco Presbyterian Church, in Neal's memory. Services under the direction of Donelson~Fir Lawn Memorial Center Hillsboro

The family of Neal William McInnis created this Life Tributes page to make it easy to share your memories.

Send flowers to the McInnis family.