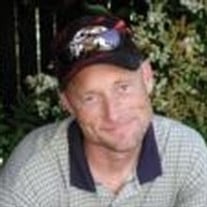 Matthew Franklin Walker, 44, died January 21, 2011 after a brave fight with cancer. A memorial service will be held on January 29, 2011 at Fir Lawn Mortuary at 11:00am. Matt was born on July 12, 1966 in Mayfield, KY and moved to Oregon in 1976. He married Vicki Marion on 9/2/1989 in Hillsboro Oregon. They made their home in Forest Grove Oregon. Matt worked for Morgan Machinery Moving in Hillsboro, Oregon as a heavy haul truck driver. He loved what he did and the people he worked with. Matt enjoyed fishing with his buddy Grant, hunting, football and NASCAR racing. In 2006 he was the winner of Ford's Race to the Dream contest. He raced against 8 other people at Homestead Speedway and won a 10 day VIP trip to watch the end of the season races. Matt also enjoyed spending time with family and friends - particularly the "Saturday Game Night" crew. Matt is survived by his wife, Vicki, his children, Ryan, Izzy and Seth Walker and his Godchildren, Aubrey and Clay Thelin, all of Forest Grove. He is also survived by his brothers Charlie Walker and Luke Walker of Prineville Oregon, his sister, Melissa Lowe of Apache, Oklahoma, Grandmother Robbie Pigg of Farmington, Kentucky and numerous aunts, uncles, cousins, nieces and nephews. Donations can be made to Northwest Down Syndrome Assoc. P.O. Box 9127 Portland, OR 97207.

The family of Matthew Franklin Walker created this Life Tributes page to make it easy to share your memories.

Send flowers to the Walker family.