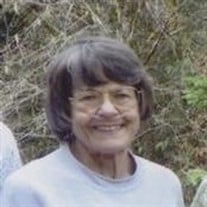 Mary Katherine Box, 69, a resident of Hillsboro, OR died Wednesday, April 11, 2012 at home of natural causes. A private family visitation and private cremation have been held. Inurnment will be held at a later date in Rochester, MN. Mary K. Box was born March 5, 1943 in Rochester, Minnesota to Richard and Esther Schoenhoff. She was raised and educated in Rochester. Mary was married to Ronald (Ron) Warner in 1961. A short time later they moved with their son Richard (Rick) Warner to Van Nuys, California. She was divorced from Ron in 1971 and moved to Oregon with her son Rick. In 1973 she married Michael Box. They were later divorced. When Mary came to Oregon, she went to work for Tektronix and was employed there for 32 years. She made many friends during her time there. Mary enjoyed flowers and always loved spring for that reason. Mary loved spending time with her family and often spoke of her special memories of time spent with her grandchildren, Joseph (Joe) Warner and Emily (Warner) Wynings when they were young. She and her friend, Karen Smith took them on many trips to the beach and Wild Life Safari along with many other places in Oregon. Joe and Emily also have fond memories of time spent at Grandma's working on "projects". She often had them over for weekends of painting, helping in her flower garden and many other projects. Joe and Emily remember the time spent with her as great fun, somehow they were always allowed to do the things that weren't allowed at home. Mary was predeceased by her parents, Richard and Esther Schoenhoff and her sister Julie Martinson. She is survived by her son and daughter in law, Rick and Shannon Warner of Bend, OR; grandson and his wife, Joe and Samantha Warner and great grandson Caden of Bend, OR; granddaughter and her husband, Emily and Andrew Wynings and great grandsons Ethan and very soon to be born Asher of Independence, OR. Mary will also be missed by her very dear friend, Karen Smith and numerous other friends. Rick and Shannon would like to especially thank Karen Smith for her long time care and devotion to Mary. The family suggests that remembrances or contributions be made to the Bonnie Hays Humane Society of Hillsboro, OR.

Mary Katherine Box, 69, a resident of Hillsboro, OR died Wednesday, April 11, 2012 at home of natural causes. A private family visitation and private cremation have been held. Inurnment will be held at a later date in Rochester, MN. Mary K.... View Obituary & Service Information

The family of Mary Kartherine Warner-Box created this Life Tributes page to make it easy to share your memories.

Mary Katherine Box, 69, a resident of Hillsboro, OR died Wednesday,...

Send flowers to the Warner-Box family.