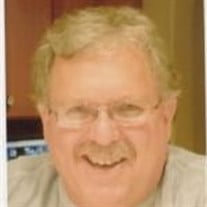 Marty passed away having recently celebrated his 54th birthday. He had been hospitalized for the past month, suffering a series of strokes after under-going a procedure to correct an ab-normal heart rhythm. Marty was born in North Bend to Wayne "Skip" Russell and Lavonna Finnecum Johnson. He spent his early years attending schools in Northwest Oregon and Vancouver, and graduated from Fort Vancouver High School in 1975. Shortly after graduation, he moved to Hillsboro and worked for his father before starting his own residential concrete construction company in 1977, Kidd Concrete Co. He then progressed to commercial concrete tilt up construction working throughout the Northwest. As his business grew, he became more frustrated with having to drive into Portland for concrete construction materials, the travel, and being away from his family. In 1988 he started Westside Concrete Accessories in Hillsboro. Marty would continue to operate Kidd Concrete Co. until 1996 and then devoted himself to Westside Concrete Accessories full-time with his wife, Cheryl. The company eventually expanded to six stores across Oregon and Washington. Marty met his wife, Cheryl Goodrich Russell, while coaching women's slow pitch softball and they married in 1984. He continued playing and coaching men's and women's teams for many years in Hillsboro, until his children were old enough to play sports. He then switched gears and began coaching sports for his sons, Brandon (24), Bradley (22), Jordan (19), and Jacob (12). Marty now spent his time on his true passion, raising his sons and coaching their sports through their youth. The boys participated in indoor and outdoor soccer and Catholic Youth Organization basketball for St. Matthew School. There were many days six to seven kids would pile in the Suburban and he would drive sport-to-sport to coach or watch, loving every minute of it. Marty was not only generous with his sons, but with their friends as well. He would become a second father figure to countless boys through the years. As his sons progressed to playing high school soccer, and he shifted from a coach to a fan, he rarely missed a Jesuit High School soccer game. He was an avid music buff, there wasn't a song he didn't know, and an adventurous traveler. He loved Mexico and Europe. Marty was a serious Parrothead, having seen Jimmy Buffet at least 25 to 30 times, recently in concert in Paris, France. Marty enjoyed weekends at their beach house in Pacific City with family, friends, and three dogs. He also was involved with Pizza Schmizza, loving the construction part of the business and picking out the interior design for the stores. In addition to Marty's wife, Cheryl, and four sons, he is survived by his father, Wayne "Skip" Russell; stepmother, Sue Russell; sister, Brenda Indeson; and brothers, Brian "Bud", Bill, Sean, and Mike Russell. His mother, Lavonna Johnson, preceded him in death. Services will be held at 11 a.m. Friday, Jan. 28, 2011, in St. Matthew Catholic Church, Hillsboro.

Marty passed away having recently celebrated his 54th birthday. He had been hospitalized for the past month, suffering a series of strokes after under-going a procedure to correct an ab-normal heart rhythm. Marty was born in North Bend to Wayne... View Obituary & Service Information

The family of Martin Wayne Russell created this Life Tributes page to make it easy to share your memories.

Marty passed away having recently celebrated his 54th birthday....

Send flowers to the Russell family.