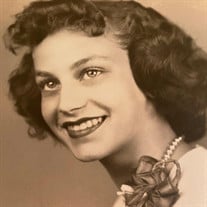 Margie Dean Johnson passed away peacefully surrounded by her family on February 13, 2022, at age 89. Margie Dean Dwyer was born on January 25, 1933 in Garibaldi, Oregon to Ruby and Robert Dwyer. She attended school in Garibaldi and married her high school sweetheart; Anthony “Swede” Johnson on September 11, 1948 at St. Mary’s by the Sea Catholic Church in Rockaway Beach, Oregon. They lived in Garibaldi, Beaverton, Hillsboro, Newberg, Newport, Tillamook, Newport and Aloha. She is preceded in death by her husband Swede and her son Steve and daughter-in-law Cheryl. When her husband passed in 1987, she moved back to Garibaldi and worked at Godfrey’s Pharmacy. She retired and moved to Lincoln City, then lived in McMinnville and passed away in Hillsboro. She loved watching all her kids in sports, was a member of the Elks Lodge, was on a bowling league, she loved her flowers and gardening, going to the Casino and spending lots of time with her family. She was also a Portland Trailblazer fan. Margie was a homemaker and had 8 children, 17 grandchildren, and 43 great-grandchildren. Survivors include her children, Jerry (Beth) of Hillsboro, Mick (Darie) of North Plains, Brenda (Jay) Lemmon of Otis, Bob of Hillsboro, Kathleen Johnson of North Plains and Jim (Pam)Johnson of Newberg, and Linda Lohman of Lincoln City. She is also survived by her nieces Patti Dee Capasso and Paula (Jack) Kriz both of Newberg and nephew Kent Capasso of Tigard. The family suggests contributions can be made to The Johnson Family Memorial Athletic Scholarship: Jerry Johnson, 2050 SE Larson Court, Hillsboro, OR 97123 A graveside service will be held March 18th Friday 1:00pm at Fir Lawn Memorial Park In Hillsboro, Oregon. Reception to follow at St Edward Catholic Church hall in North Plains, Oregon.

Margie Dean Johnson passed away peacefully surrounded by her family on February 13, 2022, at age 89. Margie Dean Dwyer was born on January 25, 1933 in Garibaldi, Oregon to Ruby and Robert Dwyer. She attended school in Garibaldi and married her high... View Obituary & Service Information

The family of Margie Johnson created this Life Tributes page to make it easy to share your memories.

Margie Dean Johnson
passed away peacefully
surrounded by her...

Send flowers to the Johnson family.