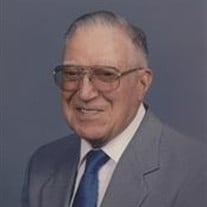 Lester Leo Jordan, 93, a resident of the Hillsboro community passed away on Monday, February 27, 2012 from natural causes. Funeral Services will be held Friday, March 2, 2012 @ 2:00 PM at Valley Memorial Mausoleum, Tualatin Valley Highway, Hillsboro with Pastor Mike Hoff officiating. Military Honors under the direction of the Oregon Military Honors Team. Lester was born December 29, 1918 in Salmon, Idaho to Charles P. and Daisy E. Mahaffy Jordan. He was raised and educated there having graduated from Salmon High School then moved to Montana. Lester was united in marriage to Edith Santhusien on December 23, 1939 in Manhatten, Montana. They raised two sons and celebrated sixty years of life together before she preceded him in death on September 6, 2000. Following his education Les worked at the gas station with his family. He was drafted in March of 1941 into the US Army . After several years of service he was critically injured. He was awarded two purple hearts during his tour of duty and he returned home in 1946. Over the years he drove his own tanker truck in Great Falls, Montana and owned a taxi in Livingston, Montana, In 1965 the family settled in the Hillsboro area where he worked as a shipping foreman for the Diamond Industries for many years. Les was an active member of the Singing Hills Christian Church, he even helped build the new church building. Among his personal interests he loved carpentry. He build a deck at the home of his son, he enjoyed helping others, loved children and animals. When babysitting the Granddogs he was known to let them get away with treats and things. Les was preceded in death by his son, Charles H. Jordan. Surviviors include his son and daughter in law, Duane and Sandra Jordan of Hillsboro, a sister, Mary Burshek, Washington, two grandchildren; Kurt L. Jordan, Hillsboro, Tami Asbury of Arizona, three great grandchildren; Kaylee Jordan, Utah, Marcus and McKenzie Asbury of Arizona, Great Great Grandchildren Mason and Hunter Asbury of North Carolina.

The family of Lester Leo Jordan created this Life Tributes page to make it easy to share your memories.

Lester Leo Jordan, 93, a resident of the Hillsboro community...

Send flowers to the Jordan family.