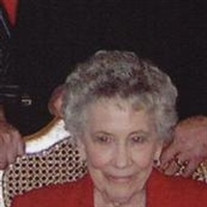 Laverne H. Parker age 88 of Hillsboro died in Hillsboro April 3, 2011. She was born Jan. 4, 1923 in Ponca, Nebraska. Laverne attended high school in South Sioux City, Nebraska. She married George Clay in 1940. They moved to Drain, Oregon in the early 40's and resided there until moving to Portland in the early 50's. Mr. Clay died in 1973. While in Portland Laverne worked as a waitress at The Multnomah Hotel and Ye Olde Town Crier. Laverne married Rex Parker in 1975. He preceded her in death in 1985. She became a companion to Donald Baxter in 1988. He died in 2001. Laverne was a 31 year resident of Lebanon before moving to Hillsboro in 2005 to be near her son. Memberships, include the Elks Club and American Legion in Lebanon. Survivors are her son Larry Clay of Hillsboro, OR, daughter Janice Hunt of Canby, OR, step daughter Anita Parker of Albany, OR; sister Evelyn Gaudern of Reno, NV, grandchildren; Cord Clay of Hillsboro, OR, Tony Hunt of Oregon City, Brian Hunt of Columbus, TN, Tammy Richards of Gladstone, OR, Kelli Meeker of Canby, OR, Kamera Laws of Hillsboro, OR, Penni Clay of Boca Raton, FL, step grandson Jordan Johnson of Albany, OR, 13 great grandchildren and 4 great great grandchildren. A Funeral Services will be held at 1:00 P. M. Friday April 8, 2011. at Donelson-Fir Lawn Memorial Center Chapel in Hillsboro. Private family committal at Skyline Memorial Gardens in Portland

The family of Laverne H. Parker created this Life Tributes page to make it easy to share your memories.

Send flowers to the Parker family.