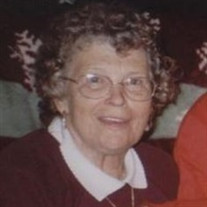 Junetta W. Applebee, age 79, of Forest Grove, passed away Sat., May 4, 2013, in Scappoose. She was born June 29, 1933, in Schell City, Mo., to Thomas and Sarah Harold. A memorial service will be at 12 p.m., Sat., May 11, 2013, at Forest Grove Elk's Lodge. She moved to the Farmington area of Hillsboro as a young girl with her family. She married Milo Applebee on July 2, 1951, in Stevenson, Wash. He preceded her in death in 1987. She worked as a Grant and Roth Plastics for several years, but retired early to care for her husband. She enjoyed sewing, camping, fishing, potluck and going out to lunch with the girls. Survived by four sons, Dale of Hillsboro, Terry of St. Helens, David of Hillsboro and Neal of Yuma, Ariz.; two brothers, John Harold of Gaston and Marvin Harold of Hillsboro; three sisters, Millie Ferguson, Eleanor Liming and Naomi Hughes, all of Hillsboro; four grandchildren; six great-grandchildren.

The family of Junetta Applebee created this Life Tributes page to make it easy to share your memories.

Send flowers to the Applebee family.