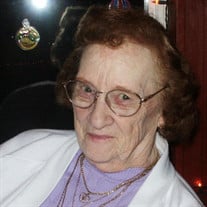 On, Sunday, July 18, 2021, June Winnifred Erickson, loving wife, mother, grandmother, great grandmother, and great great grandmother passed away at the age of 100. June was born on May 15th, 1921 in Morris, MN to Julius and Lizzie (Perry) Biksen. The Biksen family moved to Hillsboro, OR in the late 1930’s where June remained for the rest of her life. She married James Ross Dickey on Oct. 29th, 1940. They had five children. June later married Quentin Dezelle Erickson on Apr. 13th, 1960 to whom she remained married until his passing in 1998. June spent many years working at The Cannery, the Hillsboro Hospital, and Irelands Hardware Store. She was a wonderful cook and an excellent baker. She had a passion for quilting and crocheting and met many of her friends at craft fairs where she was known to have earned a ribbon or two for her craftsmanship. June also loved getting together with her friends to play Pinochle and Bingo. June is preceded in death by her first husband James Dickey, her husband Quentin Erickson, her sons Perry James Dickey, Bernard Wayne Dickey, and Dean Elwood Dickey. She is survived by her son Gary Lee Dickey, her daughter Lois Johnson (Steve), her grandchildren June Murray, Ken Woodruff (Lisa), Bernard Dickey Jr. (Tiffany), James Cook (DeAnna) and Michael Dickey (Aaren), step grandchildren Ginger Anderson (Randy), Fawn Lamb (James), and Gary Bezotte, several great grandchildren, great great grandchildren, and nieces and nephews. A private family inurnment will be held at Donelson Funeral Chapel in Hillsboro, OR.

The family of June Winnifred Erickson created this Life Tributes page to make it easy to share your memories.

Send flowers to the Erickson family.