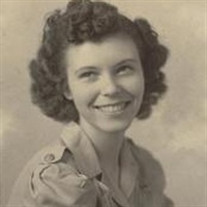 Johnnie Mae Angell, 89, passed away peacefully on October 31, 2012 in Scappoose, Oregon. She was born in Ravenden, Arkansas, on January 28, 1923, Johnnie traveled to Oregon with her mother Francis P. Wilkerson, early in life. While attending a two room school in Lakeside, Oregon, Johnnie met Russell W. Angell whom she married in 1944. A year later they had a daughter who was born while Russell was serving in Germany during World War II. In 1947 they purchased a home in Aloha, Oregon, which they shared together until Russell's passing in 1999. A funeral service will be at 1:00 pm, Wednesday, November 7, 2012, at Donelson~Fir Lawn Memorial Center, 1070 W. Main St., Hillsboro, OR 97123. Johnnie had many hobbies including playing the piano, reading, going to the Oregon Coast, painting, sewing and knitting. She was noted for her exquisite needlework winning many national, state and county awards. Her biggest honor was winning third prize in a Woman's Day magazine contest for designing an afghan using leftover yarn. "Floral Fantasia" was photographed for the cover of Woman's Day's annual book and is still being knitted today. She also loved gardening, pruning the many rose bushes that lined the front yard their Farmington Road home and tending to the vegetable garden. However, her greatest love was for animals. At any one time, she had dogs, cats, fish, birds, ducks and horses, most of which were once strays. Johnnie is survived by daughter Pat Landers and husband Garry of Scappoose, Oregon and granddaughter Leann Krainick and husband Mike of Enumclaw, Washington. In lieu of flowers, please make a donation to United Paws, PO Box 159, Tillamook. OR 97141.

Johnnie Mae Angell, 89, passed away peacefully on October 31, 2012 in Scappoose, Oregon. She was born in Ravenden, Arkansas, on January 28, 1923, Johnnie traveled to Oregon with her mother Francis P. Wilkerson, early in life. While attending... View Obituary & Service Information

The family of Johnnie Mae Angell created this Life Tributes page to make it easy to share your memories.

Send flowers to the Angell family.