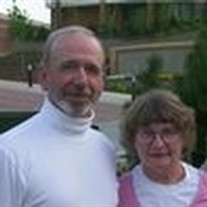 John Franklin Farris March 11, 1941 - December 13, 2010 Hillsboro - John Franklin Farris, 69, of Hillsboro, Oregon, left us suddenly on Monday December 13th at his residence. Funeral services will be held at 1 pm, December 18, 2010 at Donelson Fir Lawn Memorial Center. John was born March 11, 1941 in LaCygne, Kansas to William Arthur and Nellie Marie Farris. The family moved to Twin Falls, Idaho while John was at a young age. He grew up there and graduated from the Twin Falls High School in 1959. The family relocated later that year to Fruitland, Idaho during the summer and then later to Bountiful, Utah where he began a career working for U-V Industries in Salt Lake City, Utah as an accountant. It was in Bountiful, Utah where he met Julia Meppen, the love of his life and they were married on September 2, 1966. They raised two children, Michael and Cynthia. John was a dedicated father and family man. John treasured his five grandchildren and spent as much time as he could watching or helping them grow up. He enjoyed golfing and participating in family activities. It was in Bountiful, Utah that he joined the U.S. Army Reserves and served six years while attending college classes and working. In 1976 he moved to Boise, Idaho into a position with Conoco Oil. Later John's accounting career brought the family to Oregon in 1977 where he worked for Payless Drugs, Sequia Supply and then Forest City Trading Group continuing his career in accounting. He retired from his career to dedicate his time and energy to his family. He was a faithful supporter of his wife, children and grandchildren. John was preceded in death by an infant granddaughter, Jessica; infant sister, Carolyn and his parents, William Arthur and Nellie Marie. He is survived by his wife of 44 years, Julia; two children, Michael Farris (Christine) of Beaverton, Oregon and Cynthia Kroop (Marc) of San Diego, California; five grandchildren, Jasmine and Jordan Farris, Olvia, Liam and Nicholas Kroop; and three brothers, Art Farris (Loretta) of Vancouver Washington; Gary Farris (Kristel) of Salem Oregon, and Harry Farris (Deb) of Goodridge, Minnesota; and several Nieces and Nephews. John will be dearly missed by family and friends he was loved very much.

The family of John Franklin Farris created this Life Tributes page to make it easy to share your memories.

Send flowers to the Farris family.