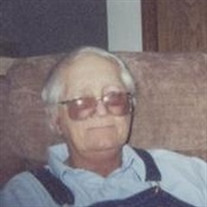 A graveside service will be at 12:00 pm, Tuesday, July 24, 2012, at Willamette National Cemetery in Portland. Joe was born in Columbia City, IN, to Martha and Charles Yontz. Joe moved to California as a child with his family. He sold news papers to the movie stars such as Cezar Romero and Ginger Rodgers. He also had a job caddying for the stars, George Gobal and Mickey Rooney. Joe loved to travel and do different jobs. He was on a boat off the coast of Florida catching Tuna. Joe served in the Air force in 1950. He was stationed in Greenland and Ship Island, Mississippi. Later on Joe and three other friends were looking for uranium when they uncovered a prehistoric elephant tusk in the foothills west of the Mojave Desert. The tusk now sits in the Kern County Museum in California. In 1955 Joe traveled to Norway on the Queen Mary to marry his pen pal of 3 years Malfrid Nielsen. Joe and Malfrid settled in Apple Valley, CA, where their son Erling was born. There Joe worked for the California and Alaska Fish and Game tagging fish. In 1958 Joe and his family moved to Portland where daughter Julie was born. Amateur dog breeders he raised British Pointers and his dog "Ace of Spades" came in third in the 1961 Willamette Valley Amateur puppy field trials. In 1963 Joe started Busy Bee landscape and supply and moved to the West Union area in 1971 where he had his business. Joe loved to travel and in 1972 he traveled to Hawaii and in 1991 he traveled to Belize where he explored and went fishing. On vacation at the Snake River Joe also paned for Gold with his friends Delbert and the Hells Canyon Sweed. Joe was loved by all and will be missed. Joe is survived by his wife of 56 years Malfrid Yontz, daughter Julie Yontz, son, Erling Yontz. Daughter in law Brenda Yontz, Grand children Ashten, Tyler, Racheal and Zack, and his brother Don Yontz of Centralia, WA. Those who wish may make contributions in Joe's memory to the Patriot Guard Riders, c/o Jon Tatum, 19220 E. Knightsbridge, Owasso, OK 74055.

A graveside service will be at 12:00 pm, Tuesday, July 24, 2012, at Willamette National Cemetery in Portland. Joe was born in Columbia City, IN, to Martha and Charles Yontz. Joe moved to California as a child with his family. He sold news papers... View Obituary & Service Information

The family of Joe A. Yontz created this Life Tributes page to make it easy to share your memories.

Send flowers to the Yontz family.