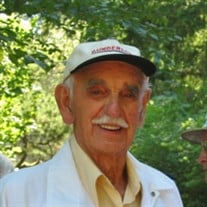 Paul and Anna Huserik's first boy was born March 9, 1912 in their small house just off the Germantown Road. The family soon would have ten children (two girls and eight boys). At age 12 Joe was hospitalized with pneumonia. He remembered the room having four beds with one child in each corner. Sometimes when he would awake in the morning one the boys would be gone. He recalled overhearing the doctor telling other doctors that if he (Joe) lived he would never be able to work. Joe's life was quite the contrary. He not only survived his hospitalization but went on to work at some of the most physically demanding jobs of the times. As a child, he cleared and worked the farm land with his father. As an older child he picked hops (which he hated) near Independence, apples at Underwood (WA) near Hood River and any other jobs that were available in the area. As an adult with a height of 6'3", long arms and big hands he continued to pick apples at Underwood (WA), fall timber near Cathlamet, Washington and made barrels in St. Johns. The list could go on. Joe married June Evelyn Fuegy in 1938 and they moved to the logging camp near Cathlamet, WA. In the 1940's Joe, June and Sandy would come to Rock Creek every weekend and work on fixing up the old house (a gift from June's parents) to their liking. Joe developed his carpentry skills. He looked for a job while waiting to be drafted and was hired by Gunderson Brothers as a carpenter. Gunderson obtained a deferment for Joe and he became a crucial part of the life boat building in the war effort. After the war he continued to build ships and barges; eventually becoming foreman over the carpenter crew. As Gunderson grew, the demand for larger barges and vessels grew. The problem of launching had to be addressed. The barges being built would require side-launching vs. end-launching. Joe was sent to tour other ship yards across the United States to see how others launched large vessels. Joe's conclusion: Gunderson needed a "release mechanism" to safely launch ships and barges into the Willamette River. Some of these barges were nearly 600' in length and weighed many tons. As with any problem Joe faced, he gave it a great deal of thought. He built two working models out of wood (one designed by the engineers and one of his own design), and used them to explain to the engineering department which model did the job better and safer. Joe's design was adopted. A refined version of Joe's model is still used today. He was also responsible for installing the wood decking into newly manufactured rail cars, building or maintaining most of the buildings at Gunderson, and launching dozens of marine vessels. While working full time at Gunderson he built a new house, raised chickens, beef, and grew hay on his small farm. His garden was big enough to share with neighbors, friends, and family. Most of all he was known for his incredibly delicious sweet corn. Joe retired in 1978 after 35 years at Gunderson Bros. He continued to attend launchings until November of 2013. After his first retirement he needed something to keep him busy so he started his community garden service. He tilled gardens, mowed small patches of grass and hay, and helped his neighbors for over 30 years until he was 97. In December 2009 at the age of 97, he told Sandy that he guessed it was OK to retire now. He had worked about 91 years. This was his second retirement. He then was under the care of Alina Ionescu near Joanne and Jim's home. She did all the hard work so Joanne, Jim and Sandy could have good times with him. Their good times were rides to the farm to check on things and visit his grandson Ryan, wife Ali and great-grandchildren, Rhett, Jackson, and Evelyn who are living on the farm. Joe enjoyed checking on what was happening around Rock Creek, Helvetia, West Union, and the Germantown area where his brother Andy lives. Joe passed away in his sleep early Sunday morning, February 9, 2014. He was laid to rest next to June in the Phillips Cemetery on Old Cornelius Pass Road near the farm that he loved. "You can't do better in this world than first being honest and then doing a good job" Survivors: Sister: Anne Matiaco, Forest Grove; Brothers: Rudolph, Beaverton; Andy, Portland; Daughters: Sandra Friberg, Washougal, Washington; Joanne Davis, Hillsboro; Son-in-law: Jim Davis; Grandchildren: Kevin Friberg, Seattle; Tanya Friberg, Mitchell (Davis), Hillsboro; Tuesday and Nova Friberg, Seattle.

Paul and Anna Huserik's first boy was born March 9, 1912 in their small house just off the Germantown Road. The family soon would have ten children (two girls and eight boys). At age 12 Joe was hospitalized with pneumonia. He remembered the... View Obituary & Service Information

The family of Joe Huserik created this Life Tributes page to make it easy to share your memories.

Send flowers to the Huserik family.