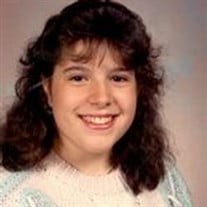 Jennifer Violet Knoy (Loerzel), age 35, passed away at the Tuality Community Hospital in Hillsboro, Oregon on October 24, 2010. She was born November 21, 1974 in San Clemente, California, to Larry and Tereasa Loerzel from Cornelius, Oregon. She attended Cornelius Grade School and graduated from Forest Grove High School in 1992. On September 14, 1995 she was united in marriage to Gary Craig Knoy in Gresham, Oregon. They were divorced in 2004. Jennifer is survived by her parents; grandparents, Donald and Billie Herman from Hillsboro, Oregon, and Violet Loerzel, from New York Mills, Minnesota; three brothers, Larry John (Kasie) and Michael Joseph Loerzel, both from Hillsboro, Oregon, and Samuel Joseph Loerzel, from Cornelius, Oregon. She is further survived by numerous aunts and uncles, nieces and nephews, and many cousins and friends. She was preceded in death by her grandfather, Benedict Loerzel, and her uncle, Michael Herman. Memorial service for Jennifer will be held at 10:30 a.m., Saturday, October 30, at New Life Baptist Church (formerly the Brookwood Baptist Church), 3440 E. Main Street, Hillsboro, Oregon. Pastor Albert Harris will officiate. We would like to thank all of the staff at the Tuality Community Hospital in Hillsboro for their help and support.

The family of Jennifer Violet Knoy created this Life Tributes page to make it easy to share your memories.

Jennifer Violet Knoy (Loerzel), age 35, passed away at the Tuality...

Send flowers to the Knoy family.