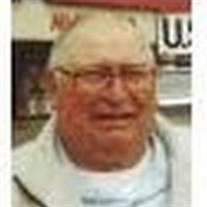 Buck Shaw was born in Marlow, Oklahoma on January 18, 1937 and peacefully passed away in his home on July 13, 2012. Buck was the only son of five children born to Hose and Donia Shaw. Buck moved to the Hillsboro, OR, area when he was eight years old with his parents and sisters. He married his childhood sweetheart, Norma June Patrick, on April 15th, 1956. They lived in the Cornelius pass area until 1960 when they moved to Dixie Mountain Road. A graveside service will be at 10:00 am, Friday, July 20, 2012, at the Old Scotch Church Cemetery, 30685 Scotch Church Rd., Hillsboro, OR 97124. Immediately following will be a Celebration of Life Service at 11:00 am, Friday, July 20, 2012, at the North Plains Christian Church, 31231 NW Commercial St., North Plains, OR 97133. Buck has been a faithful, active member of the North Plains Christian Church for 45 years. Buck's upbringing instilled in him a sense of responsibility, reliability and a strong work ethic. Buck carried his work ethic into his career at Teufel's Nursery and then with Cascadian Landscaping, where he retired. In his younger years, Buck enjoyed playing the guitar at church and in his brother in-law's band. He also enjoyed hunting with his neighbors, later with his son in-laws, and then with his son. He loved being outdoors, training and riding horses, and could often be found sitting on his four wheeler in the pasture talking to the animals. People were family to him; he showed comfort and compassion when needed but was strong and firm when appropriate. Buck is survived by his wife, Norma Shaw of North Plains, OR; daughters Peggy and her husband Jerry Freeman of North Plains, OR; Brenda and her husband Ron Lyon of North Plains, OR; Nora and her husband Dave Stuckey of Sherwood, OR; son James Shaw Jr. and his wife Gucci of North Plains, OR; seven grandchildren, thirteen great Grandchildren; two sisters, Bea and her husband Richard Holzmeyer of Forest Grove, OR, and Vera and her husband Dale Timberlake of Hillsboro, OR. He is preceded in death by his parents Hose Shaw (died 1960) and Donia Shaw (died 1962) and sisters Naomi Rogers (died 2005) and Julie Kinney (died 2006), one grandson, Logan Stuckey (died 1997) and one great grandson, Marcus Thompson (died 1998).

Buck Shaw was born in Marlow, Oklahoma on January 18, 1937 and peacefully passed away in his home on July 13, 2012. Buck was the only son of five children born to Hose and Donia Shaw. Buck moved to the Hillsboro, OR, area when he was eight years... View Obituary & Service Information

The family of James "Buck" Shaw created this Life Tributes page to make it easy to share your memories.

Send flowers to the Shaw family.