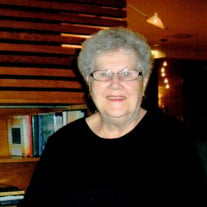 Jacqulyn June Morley, a loving wife, mother, and career educator, passed away August 20th after a long battle with cancer. Jackie was born in Turtle Lake North Dakota to John and Catherine Freborg, the 4th of 9 children. She graduated from Turtle Lake High School in 1948, and then attended Minot State Teachers College where she received a degree in Education. Jackie married Jim Morley of Velva, North Dakota on Dec 31, 1952. They had 2 children, James Timothy, and Kiza Kathleen. As children, we were told we moved out west in a covered wagon. The truth was that in 1957, the Morley family traveled out west in a Rambler station wagon to take teaching positions in Bonanza, Oregon. Jackie was a career educator who was affectionately referred to as “Mother Bear” for being firm but loving. She taught in North Dakota in a 1 room schoolhouse, and in Bonanza, Klamath Falls, Ontario, Vale, and Hillsboro Elementary School Districts during her 36 year career. She was considered by many a” Master Teacher” and made a difference in so many lives. Jackie loved to travel. One of her most memorable trips was to Ireland where she saw a thatched roof house which still belonged to distant relatives located in one of our ancestral origins, County Cork. Other interests included relaxing in her garden, reading, baking, having coffee with her many friends, crafting, knitting, social gatherings in her backyard, and shopping! Jackie was preceded in death by her husband Jim, and her daughter Kiza. She is survived by her last surviving sibling, Bonnie Levi of California, and her son Tim of Beaverton. No service will be held, but a celebration of life will take place later this fall. In lieu of flowers, the family suggests contributions to the American Cancer Society.

Jacqulyn June Morley, a loving wife, mother, and career educator, passed away August 20th after a long battle with cancer. Jackie was born in Turtle Lake North Dakota to John and Catherine Freborg, the 4th of 9 children. She graduated from... View Obituary & Service Information

The family of Jacqulyn June Morley created this Life Tributes page to make it easy to share your memories.

Send flowers to the Morley family.