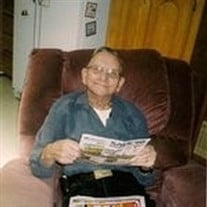 Long time Hillsboro resident George "Bud" Kleve passed away Friday, September 24th, 2010 at the age of 84 after complication from lung cancer. Bud was born on Sept. 8, 1926 in Nebraska to Walter and Cecilia Kleve. As a teenager, he moved with his family to Hillsboro area where he lived the remainder of his life. Bud was employed for 37 years by the City of Hillsboro as a Water Control Supervisor where he traveled thousands of miles over the years monitoring and preventing water contamination problems for the residents of Hillsboro. Prior to working for Hillsboro, Bud served in the Army during Korea 1950 to 1952. He was married on Dec 12, 1953 to Freda "skip" Russell who passed away January 1989. Together they raised five children, were members of the Luthearn Church, and enjoyed life's adventures, struggles, rewards, friends and families on their small farm now part of the Hillsboro Airport. Bud enjoyed gardening, wood working projects, and canning season. During their later years together they loved "motor homing" mostly along the Pacific Coast. After Skip's passing, Bud's love for traveling in his motor homes with various family members and friends continued and he made several trips throughout the United States including Alaska. Bud will always be remembered by his family and friends for his easy going attitude, willingness to give a helping hand, and honesty. Of his seven brothers and sister, he is survived by one brother Jim Kleve and one sister Betty Ewers both of Hillsboro and by his five children, John Kleve of Richland, WA, Lee Kleve of Lynden, WA, Juanita Whitaker of Clarkston,WA, Raymond Kleve of Troutdale, OR, and Marietta Kleve of Cornelius, OR, four grandchildren, Tonya Malone of San Diego CA, Tara Qualls of Hillsboro, Kenney Kleve of Sandy, OR and Heather Hirsch of Woodland, WA and five great-grandchildren. Funeral services will be at 1:00 p.m. Wednesday, Sept. 29, 2010, at Donelson~Fir Lawn Memorial Center in Hillsboro. A committal service with military honors will follow at 2:30 p.m. in Valley Memorial Park Cemetery. Bud will be deeply missed and his family and friends are invited to celebrate his life following the services. In lieu of flowers, his family requests donations to the American Lung Cancer Society.

Long time Hillsboro resident George "Bud" Kleve passed away Friday, September 24th, 2010 at the age of 84 after complication from lung cancer. Bud was born on Sept. 8, 1926 in Nebraska to Walter and Cecilia Kleve. As a teenager, he moved with... View Obituary & Service Information

The family of George Kleve created this Life Tributes page to make it easy to share your memories.

Send flowers to the Kleve family.