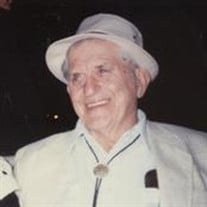 Frank Angelo Dimeo passed away September 28, 2012 at the age of 94 from worsening congestive heart failure. Fourth of twelve children, Frank Dimeo was born April 23, 1918, to parents Francesco and Theresa in an Aloha farmhouse. He graduated Beaverton High School, working a summer with the Civilian Conservation Corps before taking a motorcycle trip with a friend across the United States in September of 1939 to see the New York World's Fair and visit relatives. In Brooklyn he met his second cousin Josephine Giglio, returning three months later. She proposed then, assuring him she could support them on her $9 a week at a mirror factory. They married on January 28, 1940. Then she was fired. He brought her back to Aloha and worked as a pipefitter in Bremerton, Washington. The Kaiser shipyard back in Portland hired him as a foreman. Josephine later also worked there. By 1944 they had accomplished his two most important goals: owning his own car and home. But Frank was drafted, signing on with the Navy, Josephine following until he was shipped overseas. The only action he saw during the war was a typhoon that nearly cast him overboard and a case of dysentery in Tokyo Bay. Otherwise as a fire controller, he spent most times folding laundry and reading in the ship's library. He joked that the enemy must have seen him coming because by time his battleship Colorado arrived, the Japanese had surrendered. Eventually he became a residential contractor. In the 1950's he got up early before going to work to fry himself an egg, crooning songs like "Non Dementicar," "Fools Rush In" and "Candy Kisses" because, as he said, "I was a happy man." He retired after turning 50. He and his wife then enjoyed trips to the Oregon coast and Reno for nearly thirty years until his wife died at 81 in 1997. Until towards the last, Frank loved growing figs, garlic, horse beans, tomatoes and zucchini. He also loved classic country music, watching TV baseball games, gazing at backyard birds and reading detective novels. Favorite songs included "September in the Rain" (he met Josephine in September), "Maria Elena" and "Sentimental Journey." When asked once what he looked for in a movie, he quipped, "A way out!" But he proved a trouper here for his wife and first son who loved film and came to enjoy them, too, particularly classic westerns and Bond films. He lived life enjoying what life offers, not what it doesn't. Favorite dishes included liver and onions, veal cutlets, ribbon candy and chocolate as well as Neapolitan and vanilla ice cream. He was generous to a fault and quick-witted with a self-deprecating sense of humor. He voted Republican only onceand regretted it. He is survived by two sons, Steve and Don, a daughter-in-law Kathy, one granddaughter Melissa and four siblings, Joseph, Regina, Stella and David. Visitation hours Friday night at Donelson Fir Lawn Funeral Home in Hillsboro: 5:00-8:00. A reception follows Saturday at Glenn Walters Cultural Center from 2 until 5. Please no lilies. Donations to Compassion and Choices.

Frank Angelo Dimeo passed away September 28, 2012 at the age of 94 from worsening congestive heart failure. Fourth of twelve children, Frank Dimeo was born April 23, 1918, to parents Francesco and Theresa in an Aloha farmhouse. He graduated... View Obituary & Service Information

The family of Frank A. Dimeo created this Life Tributes page to make it easy to share your memories.

Send flowers to the Dimeo family.