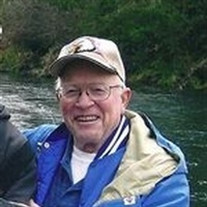 Forest "Forey" Miller died quietly in the presence of his family on November 21st at his home in Salem, Oregon. He was born in Corvallis, Oregon on May 23rd, 1927 to Rupert and Erma Miller. His family then moved to the Upper Dry Creek area in Pine Valley where he started school. Forey graduated from Halfway High School in 1944 and went on to spend 6 months at The University of Oregon before serving in the US Navy during WW11. After his discharge in 1947, he earned a degree in engineering from Oregon State College, now University. It was during his time at OSC that he married Arlene Laird, also from Halfway, Oregon. The couple had three children Scott, Macie and Marty, all born in Corvallis. After graduation in 1953, Forey began a career which lasted 30 years with the U.S. Dept. of Agriculture's Soil Conservation Service. The family lived in many Oregon communities as part of his work, but eventually made their home in Hillsboro. Forey was an avid outdoorsman and looked forward to yearly hunting and fishing trips with family and close friends. He was instrumental in starting the Portland, Oregon Chapter of the Rocky Mountain Elk Foundation where he was a life member. Forest and Arlene were divorced in 1991 after 42 years of marriage but remained close until her death in April of 2009. Another chapter of his life began when he met and married Rosemary Gritton in 1993. The couple were married on the Oregon Trail during the Sesquicentennial Celebration and traveled extensively for many years. They especially enjoyed joining up with their friends in southern California when winter rains hit the Pacific Northwest. He welcomed the addition of Rosey's children, Michelle, Shawn and his wife Shelley, Mike and his wife Lynne, their children and grandchildren to his family. He is survived by his wife, Rosemary, her sons and daughter, grandchildren and great grandchildren, a brother Dean of Boring, a son Scott Miller and his wife Glynda, their 2 daughters and 6 granddaughters of Texas, a daughter Macie Brightman, her husband Ed and son Evan of Portland. Forey was preceded in death by his parents, Rupert and Erma, his first wife Arlene, and his son Marty. A celebration of his life will be held at The Glenn and Viola Walters Cultural Art Center in Hillsboro on Sat., Dec. 11th at 12:00 PM. In lieu of flowers, he requested that remembrances be made to: Willamette Valley Hospice, The Rocky Mountain Elk Foundation, Ronald McDonald House, Special Olympics, Mouth and Foot Painting Artists, Doernbecher Childrens' Hospital or the charity of your choice.

Forest "Forey" Miller died quietly in the presence of his family on November 21st at his home in Salem, Oregon. He was born in Corvallis, Oregon on May 23rd, 1927 to Rupert and Erma Miller. His family then moved to the Upper Dry Creek area... View Obituary & Service Information

The family of Forest Miller created this Life Tributes page to make it easy to share your memories.

Forest &quot;Forey&quot; Miller died quietly in the presence of his family...

Send flowers to the Miller family.