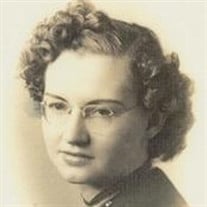 ETHEL BELLA McLAIN On May 4, 2011 our beloved wife, mother, sister, grandmother, aunt and friend, Ethel Bella McLain, "went home" to be with her Lord. She was 94 years young and had a wonderfully happy full life spent with her family. She died in Portland, OR. Mrs. McLain was born December 28, 1916 in Cleveland, Ohio to parents Adam and Ethel Bella. The family came to Oregon in 1912 settling in Orenco where her father was employed by the Oregon Nursery Company. She attended Orenco Elementary and Hillsboro High School. Adam Bella helped found the Hungarian Baptist Church in Orenco where the family attended. Ethel also enjoyed going with her friends to services at the Orenco Presbyterian Church. In 1938 Ethel met Earle McLain while singing in the choir at Hillsboro Baptist Church. They were married in 1939 and lived in Hillsboro where Earle was in the construction business. This past April the McLains happily celebrated their 72 nd anniversary. Daughter Judith was born in 1940 and in 1943 Earle II arrived. The family was active at the Baptist Church with Ethel serving as church treasurer; she also participated in youth leadership and in music ministry. Mrs. McLain was a devoted wife and mother. She loved the arts, especially music and oil painting, and provided music lessons for her children as well as exposing them to fine musical literature. Other interests were politics, current events, sports, word games and she completed the NY Times crossword puzzle every day. In the 50s she was a professional "contester" entering and winning many contests resulting in prizes for the family. During her career she was employed by the Hillsboro Argus, Meier & Frank, Multnomah Athletic Club, and lastly worked on the copy desk at the Portland Oregonian. In 1972 the McLains moved to Oak Hills in Beaverton but they never forgot their ties to Orenco and Hillsboro. The past few years they have continued their love of singing and Ethel has contributed her beautiful alto voice to the Serenaders at Hillsboro Senior center. Also, Ethel has enjoyed attending Oak Hills Community Church. She cherishes the friendships made in both places and this has been a comfort during her final illness. Mrs. McLain was predeceased by her parents, twin sons John Arthur and Thomas Charles McLain, daughter-in-law Betty McLain, and six other siblings. Survivors include: husband Earle McLain of the family home in Beaverton; daughter Judith Lewis (Nicholas), Federal Way WA; son Earle McLain II, Hillsboro; grandchildren Leslie Lewis, Ridgewood, NJ; Roger Lewis (Aubryn), Sammamish, WA; Earle Kenneth McLain III, Hillsboro; Samra Egger (Tom), Damascus, OR; Angela Fischer, Portland. Also brother Louie Bella (Emma), Portland. There are also 10 great grandchildren, many nephews and nieces, and other very special family members in the Hillsboro area, Salem, and throughout the country. The family suggests that memorial donations may be sent to Bonnie Hays Small Animal Shelter, Hillsboro, OR. Ethel Bella McLain, you will be missed. We love you dearly and, always will. "Under His Wings" Funeral services Saturday May 7, 2011. at 1:00 PM. Donelson - Fir Lawn Memorial Center Chapel 1070 W. Main, Hillsboro, OR 97123

ETHEL BELLA McLAIN On May 4, 2011 our beloved wife, mother, sister, grandmother, aunt and friend, Ethel Bella McLain, "went home" to be with her Lord. She was 94 years young and had a wonderfully happy full life spent with her family. She died... View Obituary & Service Information

The family of Ethel McLain created this Life Tributes page to make it easy to share your memories.

Send flowers to the McLain family.