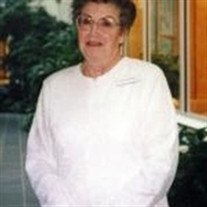 Elsie passed away January 28, 2011, in Hillsboro, Oregon, with her family by her side. She was born December 11, 1922, in Parowan, Utah, to Claude and Harriet Harris. A funeral service will be held at 10:30 am, Saturday, February 5, 2011, at the Church of Jesus Christ of Latterday Saints, Brogden Chapel, 282 NE 32 nd Ave., Hillsboro, Oregon 97124. Elsie was raised in Parowan and graduated from high school there in 1941. After graduation she worked for the Union Pacific doing sales in gift shops in Sun Valley and at the Grand Canyon. She also worked as a nurse's aid in Cedar City, UT, and then she went to work for Crown Zellerbach in Camas, WA, until her marriage. She married George Reynolds on April 27, 1951, in Washougal, WA. Elsie was a lifelong member of the Church of Jesus Christ of Latter-day Saints, and was extremely active with the church including Temple Ordinance Work. She enjoyed reading, gardening, sewing, quilting and all sorts of hand work. She is survived by her husband, George; 3 daughters, Sandy Tolman, Judy Risenmay, and Debbie Lovegren; two brothers, Clarence and Norman Harris; two sisters, Margaret Ransier and Mary Parks; 13 grandchildren and 20 great grandchildren.

The family of Elsie Reynolds created this Life Tributes page to make it easy to share your memories.

Send flowers to the Reynolds family.