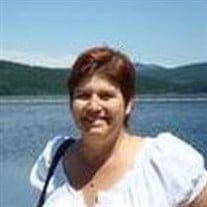 Dorene Lucille Eslick Pelaw (Ree-Nee-Roo) 51 years old, from 3637 East Main Street, Hillsboro Oregon, residing at Park Place Assisted Living Facility passed away on Friday 22 June 2012 in Tigard Oregon of Natural Causes after a long illness. Born 16 August 1960 in San Mateo, California to Robert (Bob) and Geraldine Eslick of Escondido California she is one of seven siblings. Dorene was always one who always looked for new and interesting adventures. After leaving home, Dorene enlisted into the US Air Force as a Dental Technician where she met and joined hands in marriage with Edwin C Pelaw III on February 28th 1981 in Wichita Falls Texas. . They shared more than 30 years together. During this time, Dorene found herself moving and living the life of those in service to their country. She and Edwin initially lived in Wichita Falls and then moved from there to Biloxi Mississippi and then to Utica New York making friends and positively impacting everyone's lives she touched along the way. They eventually moved from New York and made their way to the Philippines, living in San Fernando, La Union where she was active in the community be it helping a friend run a small store or learning Shotokan martial arts at the local studio. It's here where she said she was "best blessed" in life when Dorene and Edwin were able to adopt and raise from just 8 hours old their son David Michael Pelaw whom also lives in Hillsboro Oregon. Returning to the United States, Dorene lived in San Antonio where she nurtured her son and family and provided as best as Dorene could. Well known in the community, it was always her magnetic personality that made her home the central point where friends and neighbors would gather. Eventually Dorene, Ed and David moved to Laurel Maryland where she continued to immerse herself into the community and her son's activities. Towards the end of her career as a Military Spouse, they lastly re-established their home back in San Antonio Texas. Upon Ed's retirement, Dorene was recognized officially and presented her Certificate of Recognition, signed by the President of the United States for her self- sacrifice and great service to her country as a career Military Spouse, a task not easily accomplished and not often recognized. Dorene , Edwin and David made their final relocation to Hillsboro Oregon in 2000. It is here where she continued her final journey in life and never faltered as a loving wife and mother to her child. "A wonderful wife and a wonderful mother" Dorene raised David with the love only a biological mother could. As she said many times, ,"Anyone can have a child, but not everyone can have a family". Her Love was self-less, her life at times self-sacrificing for others. Until the end, she was the advocate for the rights of those whom also couldn't speak for themselves. No matter what, she was always there for her family.. She is Survived by Edwin C. Pelaw III of Hillsboro Oregon and her son David M. Pelaw of Hillsboro Oregon, her parents Robert (Bob) G. Eslick and Geraldine Mea (Crouse) Eslick of Escondido California, along with her siblings Kathy Waffle of Foster City California, Ralph Eslick of Pleasanton California, Russell Eslick of Lotus California, Mary Moore of Midlothian Virginia, Joanie Stubbs Temecula California and Melissa Murphy of Santa Anna California and many Aunts, Uncles, cousins, nieces, and nephews too numerous to list. A Celebration of the Life of Dorene will be held where she was baptized and attended church services. Our Celebration of Dorene will occur at the New Life Baptist Church, 3440 E. Main Street, Hillsboro, Oregon, 97123 on Saturday 30 June 2012 at 1030am. Reception will also be held at the New Life Baptist Church or at 3637 East Main Street, dependent on weather. Lastly we would like to thank the countless people from Tuality, St Vincent's, and OHSU Hospitals for all the courtesy, care and compassion they have given us throughout the years, and Park Place Assisted Living Facility, for assisting with her daily care and giving Dorene the opportunity to further her fellowship and live a more fruitful life during her final sojourn on earth. This Celebration of Life is open to all that have known Dorene Pelaw and her family. For more information feel free to call 503-453-2611 God looked around his garden And He found an empty place. And then He looked down upon the earth, And saw your tired face. He put His arms around you, And lifted you to rest. God's garden must be beautiful, He always takes the best. He knew that you were suffering, He knew you were in pain, He knew that you would never Get well on earth again. He saw the road was getting rough, And the hills were hard to climb, So He closed your weary eyelids, And whispered"Peace be thine." It broke our hearts to lose you . But you didn't go alone, For part of us went with you, The day God called you home.

The family of Dorene L. Pelaw created this Life Tributes page to make it easy to share your memories.

Send flowers to the Pelaw family.