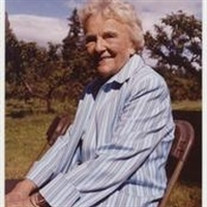 A Funeral Mass will be celebrated Tuesday, December 6th at 10:30 am at St. John Fisher Catholic Church, 7007 SW 46th Ave, Portland, Oregon with Monsignor Tim Murphy as celebrant. Family and Friends are invited to attend a reception immediately following the mass. Graveside services will be held at the Old Scotch Church Cemetery, Hillsboro, Oregon. Donna Amzetta Gregg was born May 25, 1925 in Portland, Oregon to Orville E. and Alice Delia Hill Bell. She was raised and educated in Portland having graduated from the Holy Child Academy in 1943. Donna was united in marriage to Thomas Gregg Sr. on July 10, 1943. They celebrated fify-four years of life together and raised eleven children before he preceded her in death on May 21, 1998. The most important things in her life were her children and her faith. She began her adventure into motherhood soon after her marriage. She managed scouts with the boys and swimming lessons. She saw to it that her children were raised in the catholic faith. She was always helpful to others. Donna was a hugger and a back scratcher who supported and encouraged her children. Among her personal interests she loved music. She was a trained classical pianist and played at the church for many years. Donna had a flair for fashion, she enjoyed swimming, an occasional game of golf and horseback riding. Her favorite book was her Bible which had well worn pages from her contant prayers. She was preceded in death by her brother, Robert Bell. Survivors include her eleven children and their spouses; Mary Alice and Robert Bronson of Portland, Thomas III and Mary Gregg of Hillsboro, Carolyn Rossi of Portland, William Gregg of Aloha, Deborah Gregg of Portland, John Gregg of Pendleton, Theodore and Donnette Gregg of Vista, Ca, Paul and Susan Gregg of Oregon City, Joseph and Lisa Gregg of Issaquah, Wa, Theresa and Tim Polacek of Beaverton, Patrick and Tanya Gregg of Canby, sister, Mary Ellen Landry, brother, John Bell, as well as twenty grandchildren and six great grandchildren. The family suggests that remembrances maybe contributions made to the Countryside Christian Center, 1850 McMullen Booth Road, Clearwater, Florida 33759, attn: Jeff & Robin Pike, in Donnas' memory. Please check back for photos and for updates.

The family of Donna Amzetta Gregg created this Life Tributes page to make it easy to share your memories.

A Funeral Mass will be celebrated Tuesday, December 6th at 10:30...

Send flowers to the Gregg family.