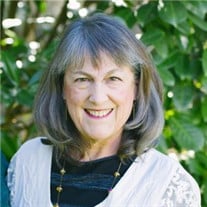 Connie Jo (Tyson) Knepper, 68, of Tualatin, passed away peacefully March 5, 2022 at OHSU from kidney failure, the result of a seven-year battle with Multiple Myeloma. Her family was by her side. Connie was born Aug. 18, 1953 to Dale and Jo Anne (Knox) Tyson in San Antonio, Texas. She grew up and attended school in Hillsboro, graduated from Hilhi, then attended the University of Oregon. There she met her future husband, Ken, and earned her degree in speech pathology and audiology. Connie and Ken were married Sept. 6, 1975. They had two children, Kyle and AnneMarie, an enriching experience that contributed greatly to their 46 wonderful years together. Connie started her career at Tucker-Maxon Oral School in Portland, teaching hearing-impaired children to talk. After 19 years and earning a second degree in graphic design, she left Tucker to teach design software classes. Her final career stop was at MBM Properties, a position she truly loved and held for 18 years. No matter the cancer treatment, and there were many, she treasured her time at MBM and refused to quit. Aside from her family, Connie's greatest loves were reading and travel. National Parks were a frequent summer destination. She also visited many European countries, Canada, Mexico, and Cuba. Her favorite cities were London, Barcelona and Prague. In Oregon, she enjoyed walking to the jetty on Nedonna Beach and playing Tripoly and Mexican Train at the family beach house, sometimes until as late as 9:30 p.m. Walking through the meadow at Black Butte Ranch with friends and daily family time at the pool provided her with great joy. Connie and Ken's special place was Hawaii, where many wonderful memories were made while hiking in Volcano National Park and eating at Lava Lava Beach Club. Connie was an original member of a 12-woman monthly Pinochle group where she developed some of her dearest friendships. She was active in the group through this Christmas season. The "serious" card-playing felt more like a party, and Connie loved a good party. Connie was preceded in death by her father, Dale; and her brother, Steven. She is survived by her loving husband, Ken; and her adult children, AnneMarie (Chris) and Kyle; along with her mother, Jo Anne; brother, Roger (Judy); and sisters-in-law, Pauline (Alan) and Kathy; as well as her nieces, nephews, and cousins. She was also blessed with five grandchildren, Sadie, Easton, Piper, Teddy and Fox. Connie loved family get-togethers, being a Grammy, Duck football and track meets, murder mysteries, baking and decorating for holidays, and Broadway shows, especially the works of Bob Fosse and Andrew Lloyd Webber (except CATS, which she vociferously detested long before it was cool to do so). A great day included black coffee, a brisk walk, reading to the grandkids, an old Hollywood movie, and a glass of red wine. She is already missed. Connie fought relentlessly against Multiple Myeloma for nearly eight years. She was proud to take part in research and experimental treatments in the hope her struggle would help others. Remembrances in her honor may be made to Doernbecher Children's Hospital or the healing charity of the giver's choice. A Memorial Open House for friends and family will be held from 3 to 6 p.m., Saturday, April 16, 2022, at The Community at Marquis, 19805 S.W. Boones Ferry Rd., Tualatin.

Connie Jo (Tyson) Knepper, 68, of Tualatin, passed away peacefully March 5, 2022 at OHSU from kidney failure, the result of a seven-year battle with Multiple Myeloma. Her family was by her side. Connie was born Aug. 18, 1953 to Dale and Jo Anne... View Obituary & Service Information

The family of Connie Jo Knepper created this Life Tributes page to make it easy to share your memories.

Send flowers to the Knepper family.