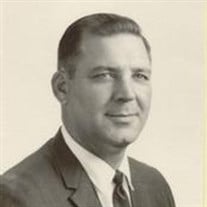 Clifford Oscar Gantt, 85, a resident of the Hillsboro community died Saturday, March 17, 2012 at St. Vincent Medical Center following a brief illness. A Celebration Of Life Service will be held Saturday, March 24, 2012 at 2:00 PM at the All Saints Episcopal Church in Hillsboro. Private Cremation Rites have been held and Private Family Inurnment will be held on Tuesday, March 27, 2012 at 1:00 PM at Fir Lawn Memorial Park with Military Honors under the direction of the Oregon Military Funeral Honors Team. Clifford Oscar Gantt was born in Knobel, Arkansas on February 10, 1927 to Oscar and Merle Gregory Gantt. Shortly after his birth they moved to Oregon. They spent some time in Klamath Falls and then moved up to Everett, Washington. Cliff graduated from the Lake Stephens High School. He then went on to attend Everett Junior College. In January of 1951 he joined the US Army where he served until January of 1953 having served overseas in Germany as a Field Radio Specialist. He also served in the Merchant Marines. Cliff felt very lucky to have a good relationship with his step-father, John Pevny. He was united in marriage to Jane Shewey on March 18, 1954 in Marysville, Washington. They celebrated one day less than fifty-eight years of life together and raised three children. In 1967 Cliff moved his family to the Hillsboro community. They began attending the All Saints Episcopal Church. He worked for the old GTE Phone Company having started his career in Washington and transferring to Oregon. It was during the time when they had a very large work force, there were many family activities with the company including trips and parties. Cliff worked for the same company for over thirty-four years before he retired. Among his personal interests he loved to go dancing. He took his family on camping and fishing trips. They liked to go out water skiing with the boat. He and Jane bought a motor home and toured the northwest. They visited her family in North Dakota, went up to Canada, down to Utah and to Arizona in the winter. Cliff was a past member of the Elks Lodge and the American Legion. He loved attending church functions. He was still dancing just a few short weeks ago. He was preceded in death by his sister, Margie Shanks and his brother, Cletus Gantt. Survivors include his wife, Jane, son and daughter in law, David and Kristina Gantt all of Hillsboro, daughter and son in law, Janell and Joe Kenedy , son and daughter in law, Michael and Nancy Gantt all of Beaverton, a sister, Rita Thompson of Marysville, Wa, Also surviving are eight grandchildren, Nicholas, Vanessa, Jonathan, Tyler, Kaitlan, Elizabeth, Mark and Ryan, as well as one great grandson, Xandur. The family suggests that remembrances may be contributions made to the All Saints Episcopal Church in Cliffs' memory.

Clifford Oscar Gantt, 85, a resident of the Hillsboro community died Saturday, March 17, 2012 at St. Vincent Medical Center following a brief illness. A Celebration Of Life Service will be held Saturday, March 24, 2012 at 2:00 PM at the All... View Obituary & Service Information

The family of Clifford Oscar Gantt created this Life Tributes page to make it easy to share your memories.

Clifford Oscar Gantt, 85, a resident of the Hillsboro community...

Send flowers to the Gantt family.