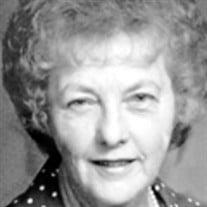 Friedman, Clara Thelma Olsen 89 Sept. 04, 1923 July 23, 2013 Hillsboro resident Clara Thelma Olsen Friedman passed away peacefully at home on July 23, 2013. She was 89 years old. She passed away in the loving arms of her children, Joellen Jensen and Cleve Friedman. She is survived by her large family; her daughter, Joellen Jensen and Allen Jensen; and her son, Cleve Friedman. She has eight grandchildren, Alana Jensen Hunter, Evan Jensen, Corianne Jensen Bates, Janna Jensen, David Friedman, Debbie Friedman, Jonathan Friedman and Sarah Friedman. She also has eight great-grandchildren, Mitchel Hunter, Zachary Hunter, Amelia Hunter, Adalee Bates, Stephen Bates, Heidi Bates, Davis Jensen and Jack Jensen. Clara was born in Sugar City, Idaho, on Sept. 4, 1923, to Gladys Allen and Evin Olsen. She grew up with two brothers and five sisters in southern Idaho and graduated from Saint Anthony High School in 1941. During World War II, she made bullets at a munitions factory in Los Angeles. And she fell in love with Army serviceman Joseph Friedman. Clara married her sweetheart in October 1946. She later worked as a diamond sales person at Fedco, California's first membership department store, while Joseph worked for the Standard Oil Co. As a young couple, they welcomed two children into the world, Joellen F. Jensen of Hillsboro and Cleve J. Friedman of Beaverton. Before Joseph passed away in 1984, they enjoyed traveling together and were members of the Good Sam RV Club. They frequently traveled to Yosemite National Park, visited their children and grandchildren in Oregon and took a trip to Alaska together. Clara enjoyed toll painting, playing card games, cooking, traveling, card making, quilting, reading, gardening, collecting dolls and nativity sets and spending time with her family. She enjoyed making the Christmas holiday a celebration for the entire family by making cookies, decorating the house and wrapping gifts for everyone. And when she was behind the wheel, she was always on the lookout for "turkeys" in need of a "knuckle sandwich." Her wiry wit, sense of humor and compassion for others brought smiles, laughs and happiness to all who knew her. Funeral services will be held July 30, 2013, at the LDS Hillsboro Stake Center, at 11 a.m.

The family of Clara Friedman created this Life Tributes page to make it easy to share your memories.

Send flowers to the Friedman family.