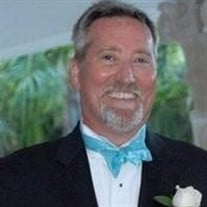 Goodness, Carry O., 51 May 28th, 1960 - December 18th, 2011. Carry Goodness was born May 28th, 1960, in San Jose, California. As a young adult, Carry moved to Oregon with his family and began his career with Intel Corporation in the year 1979. Over the course of his 32 year career with Intel he had worked on numerous projects - currently a program manager for SoC product development. He was a highly respected colleague and friend, known for his welcoming, charming and witty sense of humor. Outside of work, Carry enjoyed being with his family and friends and took great pleasure in working on his classic cars in his spare time. During the summer months, you could find Carry sitting at Portland International Raceway watching the races, soaking up the sun in one of his favorite Tommy Bahama Hawaiian shirts. Carry is survived by his son, Tony Flannigan, 30, daughters, Rachell Croce, 28, and Colby Goodness, 6, granddaughter, Audrianna, 6 Months, his Mother and Father, Ken and Gay Check, and his sister Valerie Goodness. Carry, beloved father, son and friend, will be deeply missed by his family and friends. Services will be held on Monday, January 2nd, 2012 at 2:00 PM at The Donelson, Sewell and Mathews Chapel, 1070 West Main Street Hillsboro, OR 97123.

The family of Carry Oren Goodness created this Life Tributes page to make it easy to share your memories.

Send flowers to the Goodness family.