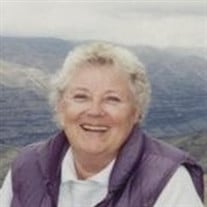 Carolyn Campbell, 78, a resident of the Hillsboro community passed peacefully at her home surrounded by her family. A Celebration of Life Services will be held at the family home during the summer months. A private internment will be held at the Ocean View Cemetery in Warrenton, Oregon. Carolyn was born October 11, 1933 in Portland, Oregon to John and Ferne Gamble. Carolyn was raised and educated in Oregon, attending Glencoe Elementary School, graduating from Washington High School, then Oregon State College with her degree in elementary education. She was a member of the Alpha Chi Omega sorority. Carolyn began teaching fourth grade in Madras, Oregon then moved to North Powellhurst in Portland. Carolyn married Donald Robert "Bob" Campbell on March 14, 1959 in Portland at the Mt. Tabor Presbyterian Church. They celebrated 52 years of marriage. Carolyn took a break from teaching to raise their two daughters while volunteering in PTA and Camp Fire Girls. She returned to teaching in 1977, joining the staff at Brown Junior High where she taught for 18 years until her retirement in 1995. Carolyn truly enjoyed working with children and her own grandchildren were a huge part of her life. She and Bob attended school, church, and sporting events including soccer and football games and equestrian shows. They were a most involved set of grandparents! Among her personal interests Carolyn loved to cook and entertain family and friends. Carolyn also enjoyed many hobbies. She was a championship bowler, a daily crossword puzzle fanatic, a spirited card player, a gifted gardener and an ardent traveler. Carolyn and Bob enjoyed the camaraderie of two bridge groups playing with friends for over 50 years while also supporting the Boys and Girls Aid Society for over 30. She took pride in keeping up their yard in Hillsboro and just weeks before passing could be seen riding the lawn mower around their yard. She and Bob also enjoyed travelling in their motor home and have visited the many corners of North America together during retirement. Carolyn is remembered by all for her wonderful sense of humor and ability to put others at ease. She was preceded in death by her daughter, Turra, in 1965. Survivors include her husband Bob, two daughters and sons-in-law; Christina and Mike Ripley of Vancouver, Wa., Suzanne and Bob Adlesich of Hillsboro, Or., and her sister, Joann Johnson of Portland, Or. Also surviving are her four grandchildren; John and Amanda Adlesich and Cassandra and Allyse Ripley. Carolyn's team from Hospice Care of the Northwest must be recognized for their loving, professional care provided during the final months of her journey. The family suggests that remembrances be made to the Boys and Girls Aid Society or the Oregon Food Bank in Carolyn's memory.

Carolyn Campbell, 78, a resident of the Hillsboro community passed peacefully at her home surrounded by her family. A Celebration of Life Services will be held at the family home during the summer months. A private internment will be held at... View Obituary & Service Information

The family of Carolyn Campbell created this Life Tributes page to make it easy to share your memories.

Carolyn Campbell, 78, a resident of the Hillsboro community passed...

Send flowers to the Campbell family.