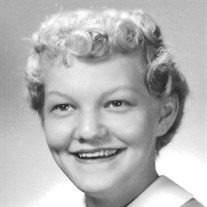 Bonnie Jean Casselman (April 5, 1937-November 13, 2021) On November 13, 2021, in Forest Grove, Oregon, the lovely town in which she was born, Bonnie Jean Casselman (née Nemeyer) drew her last breath. Born in 1937 (though her driver’s license reads 1936 because she could never remember what year she was born or for that matter, how old she was), Bonnie was the youngest and last surviving of the eleven children of Charles A. and Malinda C. Nemeyer. She often told a story that when scolding one of her brood, Malinda would shout the names of her children in order, oldest to youngest her frustration growing exponentially, before arriving at the child who required the scolding. This gave the youngest time to run. One summer day while exploring the woods with her best friend, Ronny, a bee lit on her arm. Ronny, courageous lad that he was, told her to stand still and with his trusty BB gun attempted to shoot the bee off her arm. Though the bee did indeed fly away, the BB did not. Upon arriving home, she approached her father who was tending his hives and with tears brimming pointed to her arm and said, “BB” to which her father replied, “Yup, if you scare them, they may sting you, but they don’t mean to, so don’t hurt them.” She passed that lesson along to her children—never hurt a honey bee. Oddly, she never said a word about firearms safety and if you’re wondering, Ronny remained her best friend. Through her brothers Woody and Frank, Bonnie met her husband Donovan H. Casselman. They eloped to Weiser, Idaho in 1956, with the blessing of her mother who tucked $5 into her coat pocket and shooed the last of her children out the door. Bonnie’s life was filled with music. Those of us lucky enough to celebrate holidays in a Nemeyer home have memories of sing-a-longs around the piano, guitar, accordion, and for a brief and dazzling time, a concertina that Bonnie purchased on a whim. As a young mother and an avid member of Columbia House Record Club, the monthly packages were time to stop whatever chore she was doing and listen. Her three children used to sit in front of the large stereo console with the lyric sheets for the Sing-Along with Mitch Christmas albums while Bonnie made fudge and sugar cookies. From Johnny Mathis to Bach, music always played in her house. She learned her love of gardening from her father and passed that love to her children. Her yard was the envy of the neighborhood and the activity she missed most as her energy declined. Bonnie and Don were avid road trippers. Sundays were reserved for long car rides down unfamiliar roads and when they could afford it, camping with Woody and Frank’s families at Barview or Fort Stevens. Bonnie and Don were fortunate enough to travel to Amsterdam, Egypt, Israel, Kenya, made several romantic trips to Hawaii, and often visited BC, Canada. After they retired, they made annual trips to Yellowstone and surrounding regions where Bonnie would take picture after picture after picture of local wildlife and then point out the blurry specs to her children who expressed dutiful awe. It wasn’t until Kristen joined them for one of their trips in the summer of 2004, did she discover that for her parents, visiting Yellowstone meant that they entered the West Gate early in the morning, stopped at Old Faithful for a snack and restrooms, then exited the South Gate for a hotel in Jackson Hole. In and out in three hours people (and no, Kristen wasn’t allowed to see Old Faithful erupt as there was a schedule to be kept). After Don’s passing, Bonnie and Amy visited Kristen in NYC. Though Bonnie was not a fan of the large noisy city and how much walking was required, she loved to reminisce about the holiday decorations and attending the Radio City Rockettes Christmas Spectacular. Bonnie was preceded in death by her husband of 48 years, Donovan; her son, William “Billy”; and her ten siblings Jack, Donald, Paul, Leo, Dorothy, Betty, Ilo, Elwood, Wanda, and Franklin. She is survived by her daughter Amy and son-in-law, Ron, who spend their time figuring out how to reclaim water from snow pack to quench the thirst of their high-high-desert garden in summer; her daughter Kristen, who has a million genius craft ideas—all unrealized; her son Troy and daughter-in-law, Melissa, who enjoy a house filled with beloved pets and Ravens football; and her grandson, Donovan, who when not building beautiful homes can be found snowboarding on Mt. Baker. Bonnie did not want a service nor any fuss to be made. If you would like to honor her memory, the family suggests a donation in her name to her favorite charity, St. Jude Children’s Research Hospital. Or simply raise a toast to her and imagine her sitting in the shade of the Acer, her flower beds heavy in bloom. Pull up a chair, take a deep pull from a cold beer, and watch her hummingbirds fight for the feeder.

The family of Bonnie Casselman created this Life Tributes page to make it easy to share your memories.

Send flowers to the Casselman family.