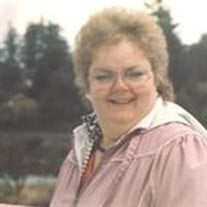 Beverley Kay Dunsdon, 67, a resident of the Aloha community died Thursday, April 5, 2012 at a local hospital of natural causes. A Private Family Visitation and private cremation rites have been held. Inurnment will be held at a later date. Beverley Kay Dunsdon was born July 7, 1944 in Vallejo, California to Homer and Janet Gowman Coolidge. She moved with her family to California until 1945 when they moved to Issaquah, Washington and then onto Pendleton, Oregon in 1956, where she graduated from Pendleton High School in 1963. Beverley was united in marriage to Allen G. Dunsdon on September 8, 1962 in Pendleton the year before she graduated. They celebrated forty-nine years of life together and raised two children. She was a busy wife, mother and homemaker in the 1980's she worked for several years at Tektronix until her physical health would not allow her to be on her feet for long periods of time. Beverley taught Toll Painting from her home for several years as well as doing seamstress work. She loved her animals and always had several in her home. They were all very spoiled. Bev was an active volunteer for the Good Samaritan Ministries where she helped out any way she could. The family attended Beaverton Foursquare Church until her health caused her to stay at home. Once she had moved into the Avamere Care Center she attended worship services in the chapel there. Among her personal interests she enjoyed going camping and trips to the beach. She also enjoyed singing and socializing with her friends and family. Her toll paintings were beautiful and she loved doing any type of arts and crafts. Survivors include her husband, Allen Dunsdon of Aloha, her daughter and son in law; Alaina and Gerry Boulier of California, son, Robert G. Dunsdon, California, a sister, Vicki and Will Spencer of Woodburn, brother and sister in law; Harry and Irma Coolidge, Also surviving are two grandsons; Gerry A. and Robert W. and wife, Carly, Boulier. The family suggests that remembrances maybe contributions made to the Good Samaritan Ministries in Beaverton, Oregon. Services are entrusted to Donelson~ Fir Lawn Memorial Center, Hillsboro, Oregon.

Beverley Kay Dunsdon, 67, a resident of the Aloha community died Thursday, April 5, 2012 at a local hospital of natural causes. A Private Family Visitation and private cremation rites have been held. Inurnment will be held at a later date.... View Obituary & Service Information

The family of Beverley Kay Dunsdon created this Life Tributes page to make it easy to share your memories.

Beverley Kay Dunsdon, 67, a resident of the Aloha community died...

Send flowers to the Dunsdon family.