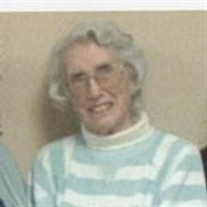 Barbara M. Jensen, 88, passed away Dec. 27, 2010, at St. Vincent Hospital in Portland. Mrs. Jensen, the daughter of Joel and Beatha Nali Shaffer, was born Sept. 24, 1922, at Fort Lupton, Colorado. She attended schools in Weld County, graduating in 1940. Afterward, she attended Colorado State College of Education, where she and her future husband, Maynard, began their journalistic professions as business managers of the college's student newspaper. She later completed her degree work at Marylhurst College in Lake Oswego, Oregon. On Sept. 26, 1943, Barbara married Maynard Jensen at Camp Butner, North Carolina. After Maynard's discharge from the Army during WWII, they resided in Eaton, Colorado. In 1950, they moved to Washington State. From 1952-62, they were the owners and publishers of the weekly newspaper at Lind, Washington. In 1962, they moved to Eugene, Oregon, where they joined the publishing staff at the University of Oregon. Mrs. Jensen was an OSEA winner of state journalistic awards. She also published children's books and wrote articles for various magazines. In 1976, they moved to the Mountaindale area near North Plains, Oregon, where her husband joined the editorial staff of the Hillsboro Argus. It was a job he held until his retirement in 1985. They moved to Hillsboro in 1987. Barbara was a member the Friendship Temple Pythian Sisters of North Plains, the Hillsboro B.P.O.E. camper club, and the American Legion Auxiliary. Survivors include two daughters: Jean Roblyer of Richland, Washington, and Teri Brosh, of Beaverton, Oregon; a sister, Arliss Monk of Greeley, Colorado; six grandchildren; and eight great grandchildren. Her husband, Maynard, preceded her in death on Dec. 27, 2004. A funeral service will be at 10:00 am, Friday, December 31, 2010, at Donelson ~ Fir Lawn Memorial Center, 1070 W. Main Street, Hillsboro, Oregon 97123. Private interment will be held at Willamette National Cemetery.

The family of Barbara M. Jensen created this Life Tributes page to make it easy to share your memories.

Send flowers to the Jensen family.