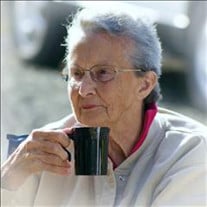 Anita Faye Clinton, 89, was born November 16, 1932, in Bolivar, Missouri, the daughter of Guy and Elsie (Adams) Kinsey. Anita was the second of five children. She lived in Missouri until 1936, when she moved with her family to Oregon. She attended school in Riddle and Forest Grove, Oregon. Anita met her husband, Glen Clinton, through their families. They courted for about a year before getting married on July 5, 1949, in Vancouver, Washington. They celebrated 58 years of marriage before his passing in February of 2008. They lived in Gales Creek and Bay City as Glen logged in the Tillamook Burn. In January 1953, Glen contracted polio, and the couple moved their small family to Dilley, Oregon. In 1972, Hillsboro became their new home, where she resided until her death on January 30, 2022. Anita worked for Washington County for 30 years as the Records Department Supervisor, retiring in 1995. She then went home to be with her family. Anita's greatest passions were her faith and daily walk with the Lord and her role as a committed wife, mother, grandmother, and great-grandmother. She loved working in her yard and growing flowers, canning, sewing, and crocheting. She made numerous Afghans for her kids, grandkids, and great-grandkids. She was a caregiver to all and especially took unparalleled care of her husband, Glen. One of her greatest joys was taking care of her grandkids and great-grandkids. She loved picking them up from school and fixing them dinner. Roast beef, mashed potatoes, gravy, homemade rolls, canned peaches, and lots of vegetables was her favorite dinner to make. Anita was preceded in death by her husband Glen, her parents, two sisters, and one brother. She is survived by her sister Vye Brandaw and sister-in-law Kay Kinsey; her two daughters and spouse Glenda Clinton and Gail and David Nolan, both of Hillsboro; grandchildren, Doug and Cindy Nolan, Dawn Nolan, and Denise and Ryan Godfrey; great-grandchildren, Faye Clement, Grace Clement, Jillian Clement, Matthew Godfrey and Jonathan Godfrey. Memorial services will be held 11:00 a.m., Friday, February 11, 2022 at the New Life Baptist Church, 3430 East Main Street, Hillsboro, OR 97123. Pastor Kevin White will officiate. Anita will be laid to rest with her husband Glen Charles Clinton at the Fir Lawn Memorial Park. Arrangements were cared for by the Fir Lawn Memorial Park and Funeral Home.

Anita Faye Clinton, 89, was born November 16, 1932, in Bolivar, Missouri, the daughter of Guy and Elsie (Adams) Kinsey. Anita was the second of five children. She lived in Missouri until 1936, when she moved with her family to Oregon. She attended... View Obituary & Service Information

The family of Anita Faye Clinton created this Life Tributes page to make it easy to share your memories.

Send flowers to the Clinton family.