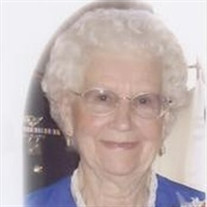 Verda Marjorie (Langbehn) Kohlmeyer , 87, fell asleep in The Lord, surrounded by her family, at her home in Gaston, on February 15. Verda was born October 20, 1923, to Edward and Lillian Langbehn at their home in Wolsey, SD. She was baptized and confirmed at St. John's Lutheran Church in Wolsey and graduated from Wolsey High School in 1941. Verda became an RN after completing St. Luke's Presentation of Nursing in Aberdeen, SD in 1945 and married her high school sweetheart, Ewald Kohlmeyer, on March 4, 1945 at St John's. Verda and Ewald moved with their six children to Washington County, Oregon in 1955. She worked as an RN at Tuality Hospital in Hillsboro and was the school nurse at Hillsboro High School while her youngest children attended there. Verda and Ewald were active in the Flying Farmers and Verda was crowned Chapter Queen in 1971. She was a member of Grace (now named Reformation) Lutheran Church in Hillsboro and served as a Sunday School teacher for more than ten years. In later years, she was involved with the Gaston Garden Club. The couple travelled extensively, visiting almost every continent as well as helping on church building projects in the United States. Verda is survived by her husband, Ewald, her children: Edward (Phyllis) Kohlmeyer Stanton (Kay) Kohlmeyer Lance (Sherry) Kohlmeyer Colin (Judy) Kohlmeyer Stuart Kohlmeyer Her grandchildren: all are last name Kohlmeyer Cindy Cary Heath Tanya Jennifer Jody Kent Scott Marcy Jamie Ben Sean Drew Geoffrey Nicholas Andrew Caitrin Eighteen great-grandchildren and one great-great grandchildSurvived by her siblings: Norman Langbehn Jim Langbehn Marilyn Manch Jerry Langbehn Carma Lee McRath She was predeceased by her only daughter, Sylvia VanWinkle, on March 7, 2007 Verda (Mom or Grandma to so many) was truly the virtuous woman described in Proverbs 31, priced far above rubies. "Her children arise up, and call her blessed; her husband also, and he praises her" (Proverbs 31:28) A memorial service will be held at 11 am on Monday, Feb. 21 at Reformation Lutheran Church, 4435 Tualatan Valley Highway, Hillsboro, OR 97123. Remembrances may be made to Reformation Lutheran Church.

Verda Marjorie (Langbehn) Kohlmeyer , 87, fell asleep in The Lord, surrounded by her family, at her home in Gaston, on February 15. Verda was born October 20, 1923, to Edward and Lillian Langbehn at their home in Wolsey, SD. She was baptized... View Obituary & Service Information

The family of Verda M. Kohlmeyer created this Life Tributes page to make it easy to share your memories.

Send flowers to the Kohlmeyer family.