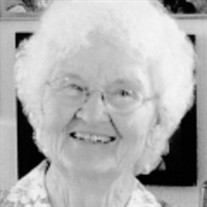 Meyers, Theora 89 June 17, 1924 Oct. 06, 2013 Theora Myrtle (Starkey) Meyers was born on June 17, 1924, in Fullerton, Neb., to Charles Lee Starkey and Myrtle Ruth Miller Starkey. She was raised in The Dalles and graduated in 1942. She went to business school in Portland where she met her husband, George Gordon Meyers Sr. They were married in 1946. She was a member of the Hillsboro United Methodist Church, the Rebekah Lodge and was a volunteer for the SMART reading program for little kids. She enjoyed gardening, reading, sewing, playing games with friends and family, volunteering and traveling. She was preceeded in death by her husband, George; and daughter, Linda. She is survived by her daughters, Becky Snyder (John) and Jill Prince (Dennis); son, George Meyers Jr; grandchildren, Nicole Bruce, Robbert Warner, Amie Reynoso, Todd and Renee Snyder, Monica, Laura, Ben and Alex Prince and Aaron and Kyle Meyers; and six great-grandchildren. She suffered from Altzheimer's and was well cared for by Tiesha Martinez, Aaron and Kyle Meyers. She passed at home surrounded by her loved ones on Oct. 6, 2013.

The family of Theora Myrtle Meyers created this Life Tributes page to make it easy to share your memories.

Send flowers to the Meyers family.