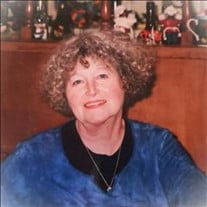 Jane LaVonne Sukut In the early morning of March 16th, 2022, Jane passed away in her home after a long and hard-fought battle with congestive heart failure. Jane Davis was born in Muskogee, Oklahoma, Thursday, August 6th, 1936. She was the 1st daughter of Euith Smith and Eugene Davis Sr. Born during The Great Depression, her family was quite poor, and nothing was wasted. They made the best of their circumstances. When Jane was 15 her family moved from Oklahoma to Oregon. She attended high school in Portland, Or, and she worked as a ticket operator at multiple movie theaters downtown. She would light up when reminiscing of The Music Box, The Broadway, and The Paramount, amongst others. Selling tickets was very glamorous and exciting to her. In 1956, while working at The Paramount Theatre, Jane met her first husband, Brent Norman Sr. She then had 3 three children: Brent Norman Jr, 1957, Christopher Norman, 1958, and Rana Mickelson, 1962. After her marriage ended, Jane met Ordell "Buzz" Sukut in 1962 while living up on Capitol Hwy. They would talk to or pass by one another daily in their neighborhood they lived in. Buzz would often fill her refrigerator with food to make sure the kids needs were met. One day Buzz said to her, "We see each other enough, we should make this official, don't you think?" And in December of 1963 they were married. He cared for and took her children from her previous marriage under his wing like they were his own, and without hesitation. And In 1964, they welcomed Teresa Thompson into the family. She then lived on Pine St, then 82nd Drive in Tigard, and Jane worked at a few jobs to help her family any way that she could when the extra help was needed. In 1973 they moved to Sherwood, and daughter Melissa Moon was born in 1977. In 1981, Buzz, Jane, and Melissa moved to Midland, TX, where they lived until the summer of 1987. After moving Buzz's business to the Nashville, TN area, Jane and Melissa moved back to Oregon in the fall of 1988, where she stayed. Mom loved Oregon, especially the Oregon Coast. She was a personal caregiver for 2 wonderful ladies in the mid-1990s to the early 2000s; Mona and Betty. Jane was especially fond of Betty, who was the mother of Judy Hammerstad, former Mayor of Lake Oswego. Betty and Judy thought the world of her, and Jane loved them like family. Judy and her husband John continued a close relationship with Jane for many years following Betty's passing. Jane loved and adored her family with ALL her heart, and had an amazing zest for life. And if there was someone who needed help, you best believe she would be the first one to offer her assistance. Jane and her kindness, mother's heart, and ability to not let this world change her, will forever be remembered by those who hold her dear. She was preceded in death by her husband, Ordell Sukut, brother Eugene Davis Jr, brother, Jerry Byrd, sister, Linda Snelling, mother, Euith Smith, and father, Eugene Davis Sr. Jane is survived by her 5 children: Brent Norman Jr, Chris Norman, Rana Mickelson (Phil), Teresa Thompson (Jay), and Melissa Moon (David). 4 grandchildren: Robert "Bobby" Norman, Melanie Squires, Douglas Bell, and Angel Norman; 8 great-grandchildren: Jaden Squires, Keira Squires, Noah Squires, Brooklyn Gadbaw, Nathan Gadbaw, Jackson Bell, Preston Bell, and Waylon Farr; 4 nieces: Candius Stickel, Misti Byrd, Jana Snelling, and Julie Snelling Downing; 1 nephew: Mike Davis. Graveside services will be held 11:00 a.m., Thursday, April 14, 2022 at Fir Lawn Memorial Park and Cemetery, 1070 West Main St, Hillsboro, Oregon, 97123. A Celebration of Jane's Life will immediately follow the graveside hosted by Jake and Brandi Moon, at 2225 Laurel St Forest Grove, Oregon.

Jane LaVonne Sukut In the early morning of March 16th, 2022, Jane passed away in her home after a long and hard-fought battle with congestive heart failure. Jane Davis was born in Muskogee, Oklahoma, Thursday, August 6th, 1936. She was the... View Obituary & Service Information

The family of Jane Lavonne Sukut created this Life Tributes page to make it easy to share your memories.

Send flowers to the Sukut family.