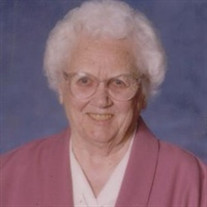 Amy Irene Slatta was born July 8, 1909 in Clarkfield, Minnesota. She was baptized July 25, 1909 in the Norwegian Lutheran Church, and confirmed June 8, 1924. Amy passed away peacefully at Tuality Hospital on November 18, 2013. Amy graduated from Clarkfield High School in 1926, and received her B.A. degree from St. Olaf College in Northfield, Minnesota, in 1931. She toured Europe as a member of the St. Olaf Choir in 1930. Amy loved music; did solo work and choir directing. She was married March 12, 1932, to Jerome E. Slatta. She taught in high schools in North Dakota at Columbus, Glenburn, Mohall, Wildrose, and Sheldon. She also taught in Turlock, CA and in 1960, in Oregon at Groner School in the Scholls area near Hillsboro for 13 years. She retired in 1974 after teaching for 25 years and also conducting the musical programs for spring and Christmas events. Amy joined Calvary Lutheran Church in 1961; sang in the choir and directed for years. She continued to play the piano at Cornell Estates until she died. Amy was an avid fan of the Portland Trail Blazers! Amy's husband, Jerome, passed away July 13, 1975, at the age of 74. He was a superintendent of schools and athletic coach for 34 years. One son, Lauren, was killed in an auto accident on July 13, 1968, at the age of 32. His wife, Corrine, passed in December of 1993 at the age of 54. Amy and Jerome are leaving three living sons: Jerome (and Linda) of Sumner, WA Donald (and Kathleen) of Crooked River, OR Richard (and Maxine) of Cary, NC and daughter, Luann (and Rudy Rugebregt) of Pebble Beach, CA 3 grandchildren from Lauren (and Corrine): Connie, Neal and Kirk of Wenatchee, WA area And grandson, Jerome David, son of Richard and Maxine And 5 great grandchildren Amy shared her musical talents wherever she lived. She had a zest for life and a happy outlook. She was blessed with good health, a wonderful family, and grateful heart. A memorial service will be held at Calvary Lutheran Church (937 NE. Jackson School Road, Hillsboro), Saturday (November 23) at 3:00 p.m.. Donations may be made to Talking Book and Braille Services in Salem, Oregon.

The family of Amy Irene Slatta created this Life Tributes page to make it easy to share your memories.

Send flowers to the Slatta family.